Fabbula is proud to announce its collaboration with Marshmallow Laser Feast artists. After the success of the exhibition We Live in an Ocean of Air at the Saatchi Gallery in London, Fabbula assures their representation in France.

Creator of immersive installations combining giant projections, interactions and virtual reality, Marshmallow Laser Feast explores the invisible links that unite us to the plant world with We Live in an Ocean of Air. This new installation continues this reflection on perceptions already developed in the Treehugger project, (awarded at Tribeca Film Festival 2017 and VR Arles Festival 2018), and In the Eyes of the Animal (Sundance Festival 2016).

This is a forgotten fact: we live immersed in an ocean of air. With this experience shared by 10 people, we are invited to enter the invisible world of relations between humans and the plant world.

Inspired by science, technology and contemporary art, experience is a way of understanding the symbiotic systems of nature through a powerful medium: the immersive experience. The human cardiovascular system interacts with very similar systems of nature. Our capillary networks, arteries and mitochondria exchange with the leaves, the phloem and the mycelium, placing each of our inspirations and expirations in a large system of reciprocities. 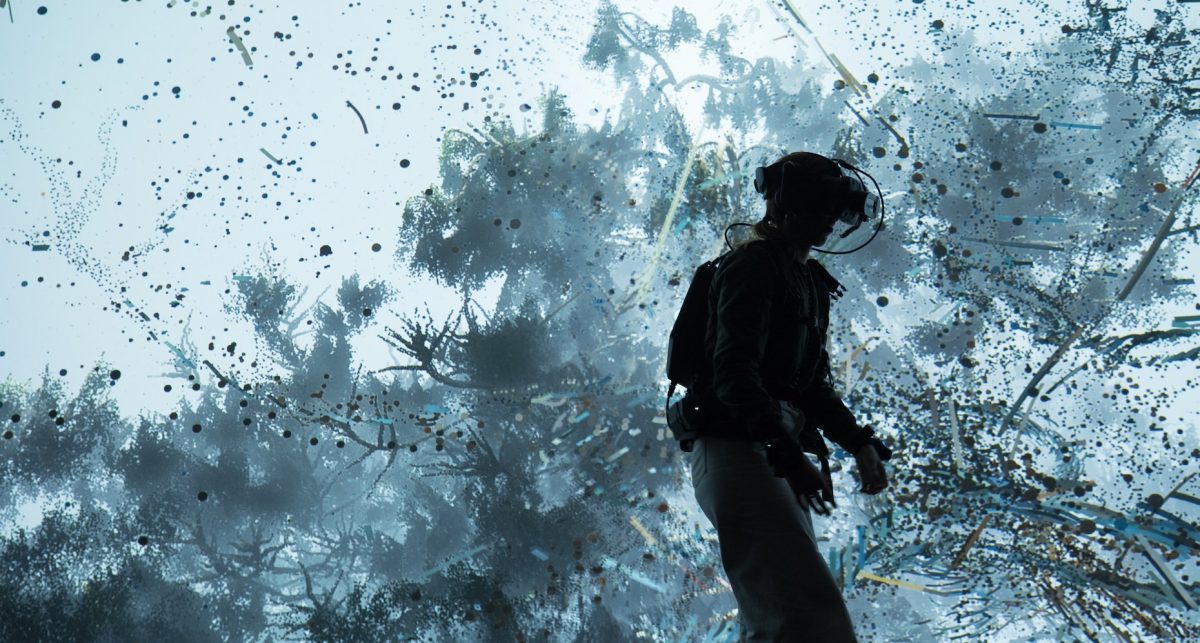 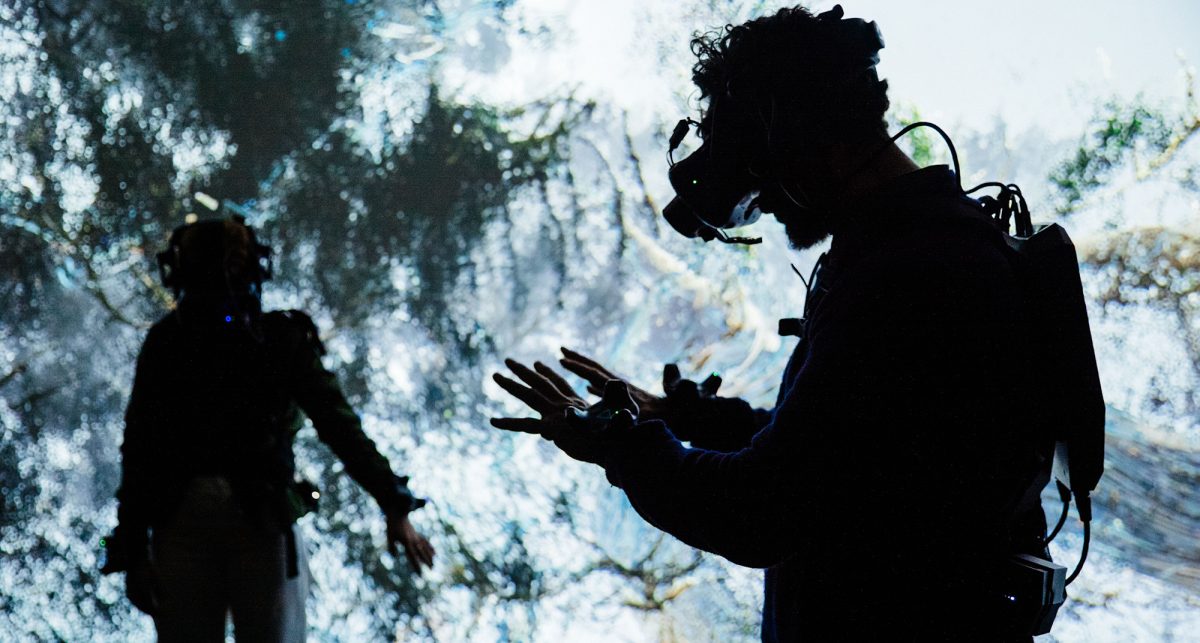 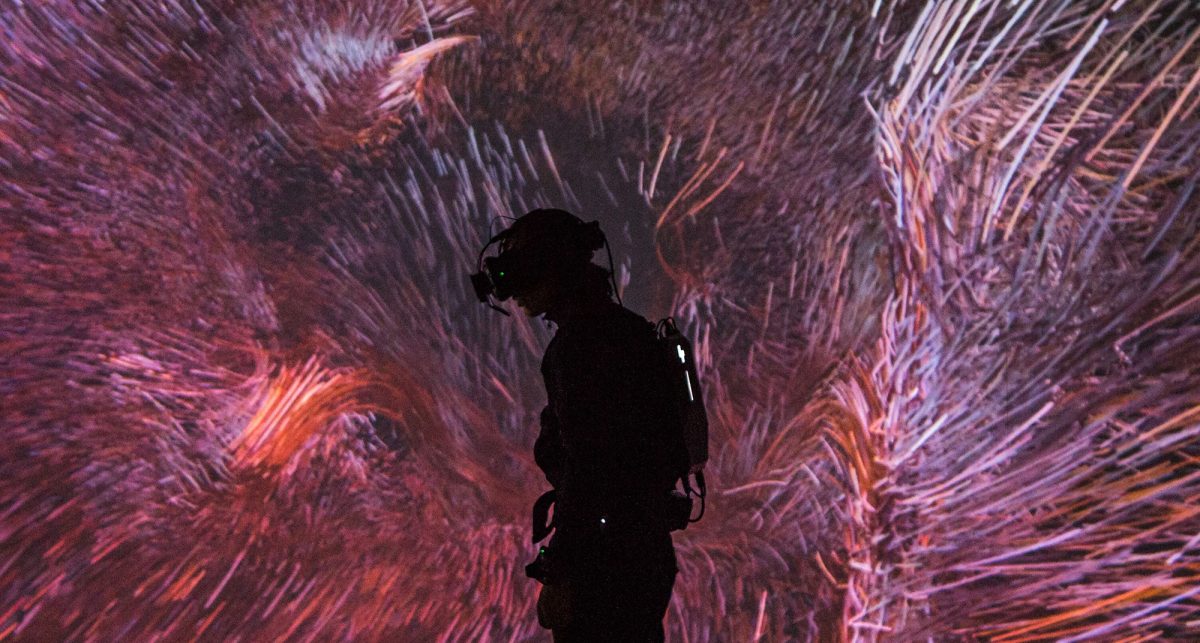 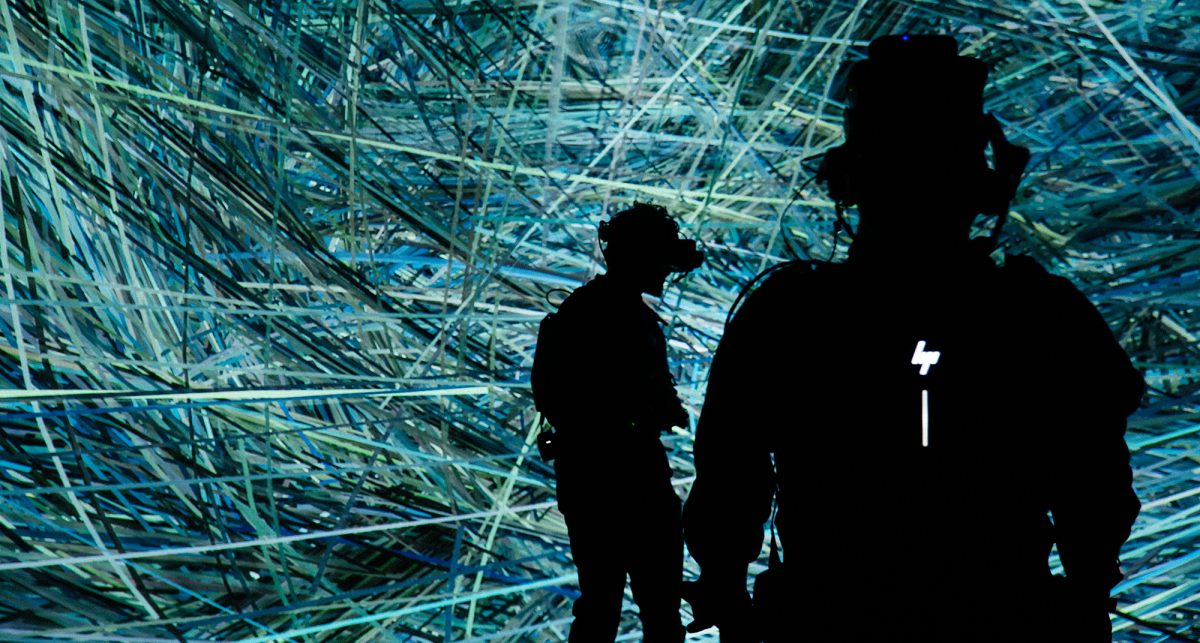 To start the experience, we are first equipped with a backpack containing a powerful computer, then fitted into an untethered VR headset on which hand motion trackers, breathing sensors and heart-rate monitors are attached. Once hooked, all those technological devices are quickly forgotten, being completely immersed in the core aspect of the experience: a meditative respiratory exercise in synchronicity with a giant tree.

As we begin our tour into this world, virtual air particles emerge from our mouth. Just as a winter’s day mist, the journey of the expired air becomes visible. We can even play with it with our hands. The air builds up around the bodies of the user’s experience fellow companions, revealing everyone around as spectral shapes.

As we gaze inward, the oxygen’s journey within our body becomes apparent. In sync with our heart beat, pulsating flows of blue oxygen irrigates the blood vessel system of our hands, revealing what happens right under our skin.

« A meditative respiratory exercise in synchronicity with a giant tree. »

That’s when a giant tree appears before us and the interdependency relationship is revealed: what we breath out is absorbed by the ancient earthling and go into its own respiratory system before being sent back to us as life giving oxygen. The experience shows how this giant tree and humans both share similar lung like arborescence in a perfect mirrored complementarity.

Since the microbiologist Lynn Margulis’ research in the 90s, the scientific analysis of relationships between species has been deeply moved by the observation of cooperation between vegetal and animal worlds. These observations blur the boundaries between the different living systems. What matters is not to distinguish what is human and what is vegetal: We Live in an Ocean of Air rather exposes the intimate connection uniting both entities into a relation of symbiosis. It questions the value of individual human study—a sort of skin encapsulated ecosystem walking around—and explores the nested ecosystems that composes the world in which we inhabit.

Autonomous virtual reality headsets, breathing and heart rate sensors, make visible the permanent gas exchange that unites us to the trees, thus encouraging us to rethink our dependence and responsibility towards the species with which we share the planet earth.

A sold out exhibition in London 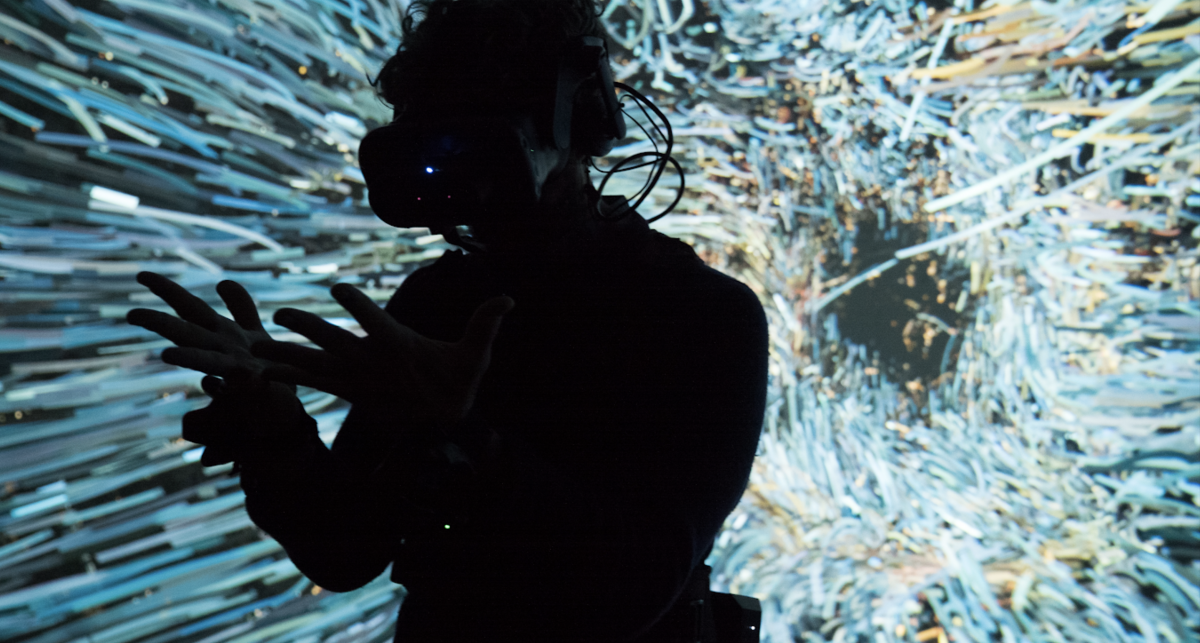 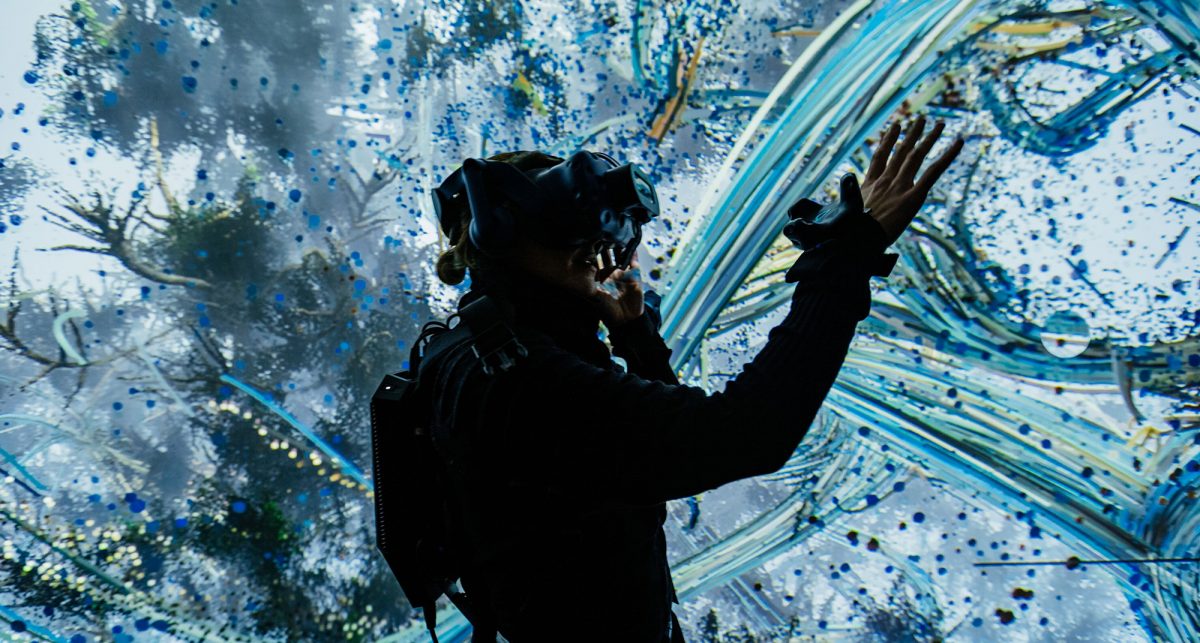 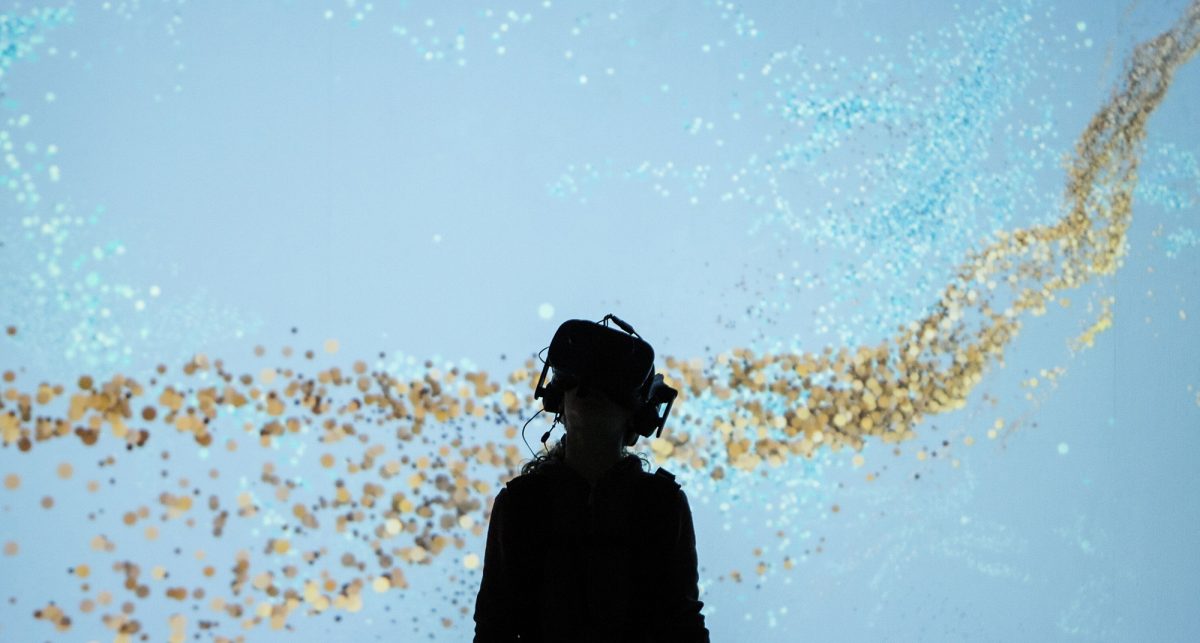 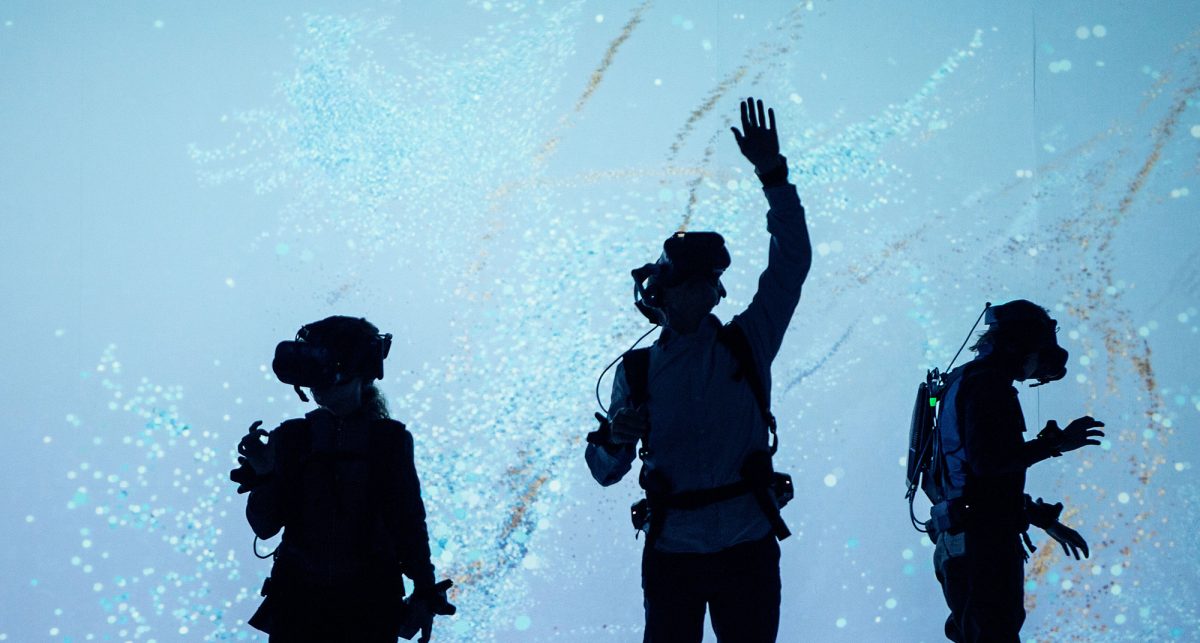 Twice extended, a 6 months sold out run and 28,000 tickets sold, the exhibition at the Saatchi Gallery in London got the crowds going in this high place of contemporary art. 70% of visitors came specifically for this exhibition, and over 93% recommended the experience to their loved ones.

The exhibition now tour around the world, in museums, galleries, and cultural venues. Fabbula represents the exhibition for France. Contact us for more information!

You are an institution?
Contact us here: tour@fabbula.com to get the complete tech rider and case study Saatchi.
Press relations: Press release and press presse@fabbula.com

We Live in an Ocean of Air was created by the immersive art collective Marshmallow Laser Feast (MLF) accustomed to Fabbula’s pages.
MLF creates immersive experiences, attempts to broaden perception, and explores our connection to the natural world. Combining architecture, contemporary imaging techniques and tactile forms, MLF sculpts sleeping spaces until they are enlivened by a playful investigation.

Inspired as much by the game as by the research, the collective seeks to free itself from the limits of the physical world to re-enact the real.