Informed as much by playfulness as research, MLF break the boundaries to worlds beyond our senses. Over the course of two years Fabbula had a chance to follow the progress of their work. Here are some excerpts of our conversations.

Fabbula: What is the idea behind In the Eyes of the Animal?

Barnaby Steel: In the Eyes of the Animal uses virtual reality as a way of expanding our concept of reality. What does the world look like from the sensory perspective of a midge? How can it sense the increase in C02 coming from the breath of a human 20 meters away? How does the lifetime of a mayfly compare to that of a 3000 year-old tree?  Alan Watts gave a wonderful lecture that compares geological time to human time by comparing an apple and a tree. From an apple’s perspective, other apples are seen being born and dying, but the tree barely changes in a apple’s lifetime. We think of our planet earth as a dead rock, but on a geological timeframe our rock peoples like an apple tree apples. By scanning a real forest and situating the installation in that same space, we were able to align the virtual world with the real world so that following the experience you would see the forest in a new light. In some ways photography does this just through unusual camera positions, with VR you can really be something else.

“Science and new technologies shine a light into the abyss, revealing a new understanding of the world and questioning our concept of reality.” 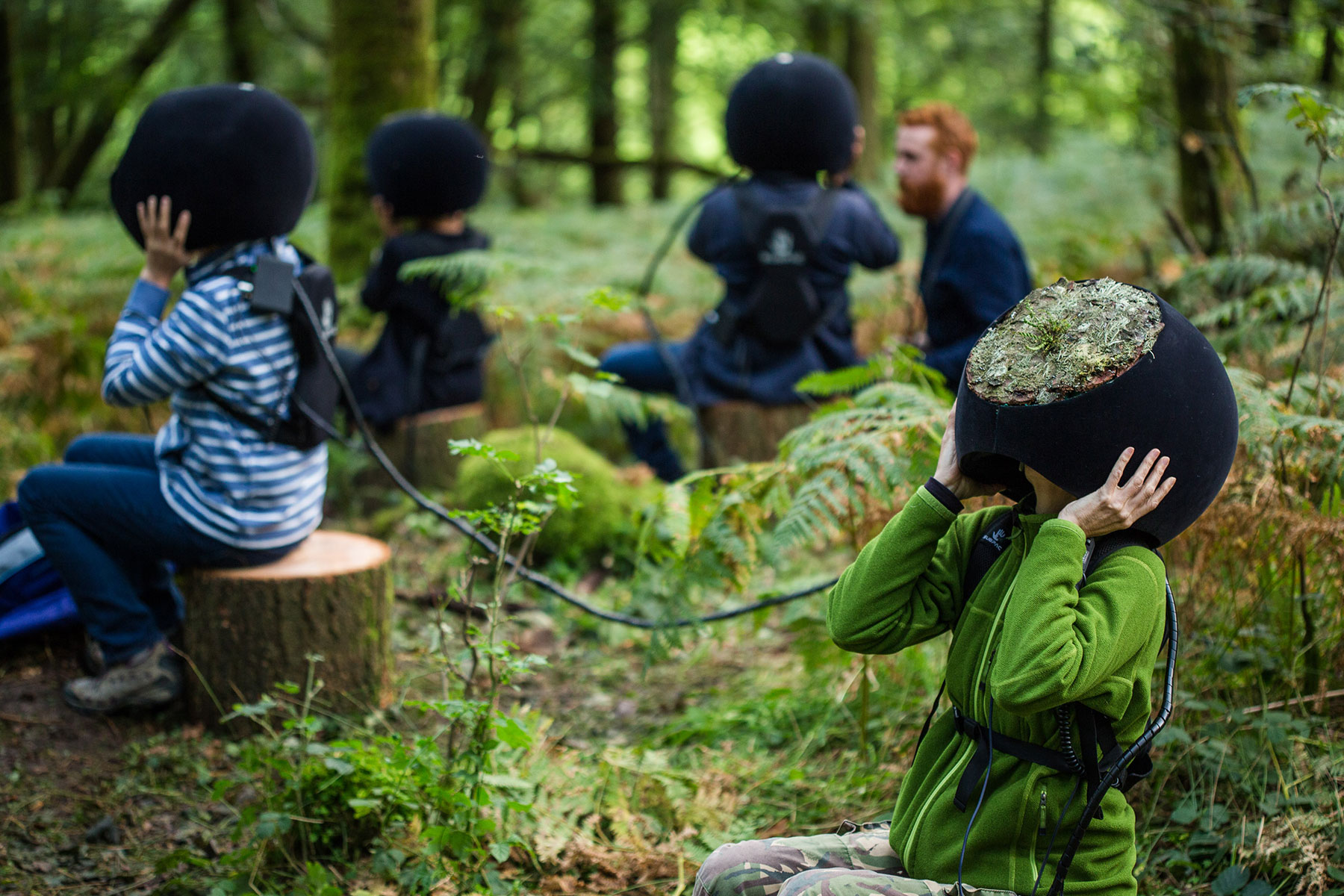 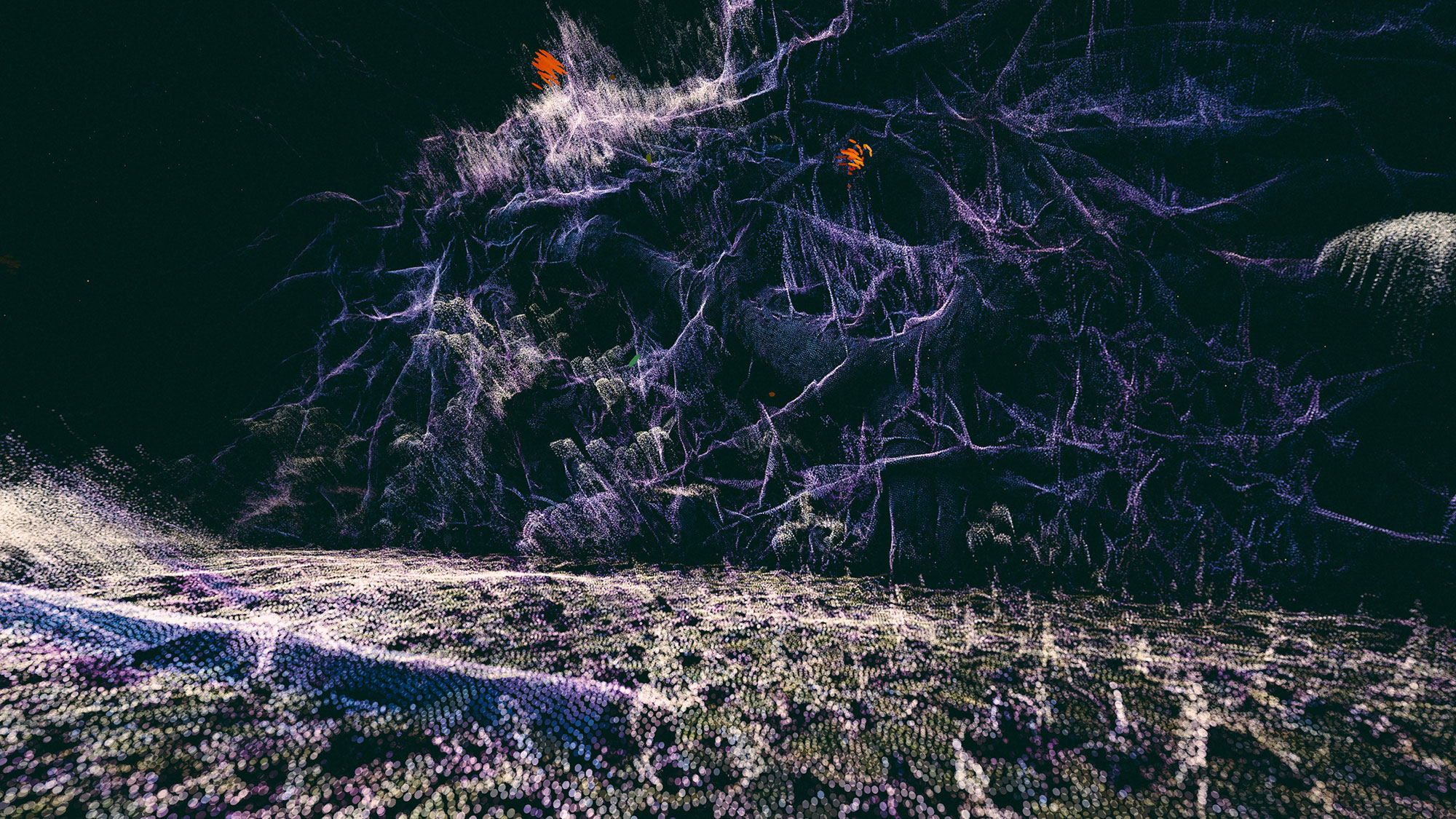 Fabbula: This has deep ramifications that we are very keen to explore here at Fabbula. Am I right to assume that In the Eyes of the Animal conveys a certain message on our connection with nature ?

Barnaby Steel:Coming from a photographic background, I’m tuned into the way that new perspectives on the everyday world can reconnect viewers to the wonder we experience as a child with fresh eyes. The repetition of day-to-day sensory bombardment can make us numb to the world around us, and VR can work like an unblocker, it shakes our snow globe.

In the Eyes of the Animal puts the viewer’s neck deep into a swamp, shrunk down to the perspective of a dragonfly on a log, gliding above the trees like a bird of prey. What we find more interesting than these pure perspectives on the forest is the question, what does this same forest look like beyond the limits of our senses, through the eyes of the animals? Science gives us a window into this world, but the reality is that a human can never truly understand what the world looks like from, for example, a bat’s perspective. It’s like explaining to a blind person what the world looks like: although you can both reach out and touch the same object, no words can truly convey the richness and complexity of vision. After a deep dive into the thesaurus we were very inspired by the paper by American philosopher Thomas Nagel, What is it like to be a bat?

“Broadening what we think of reality” 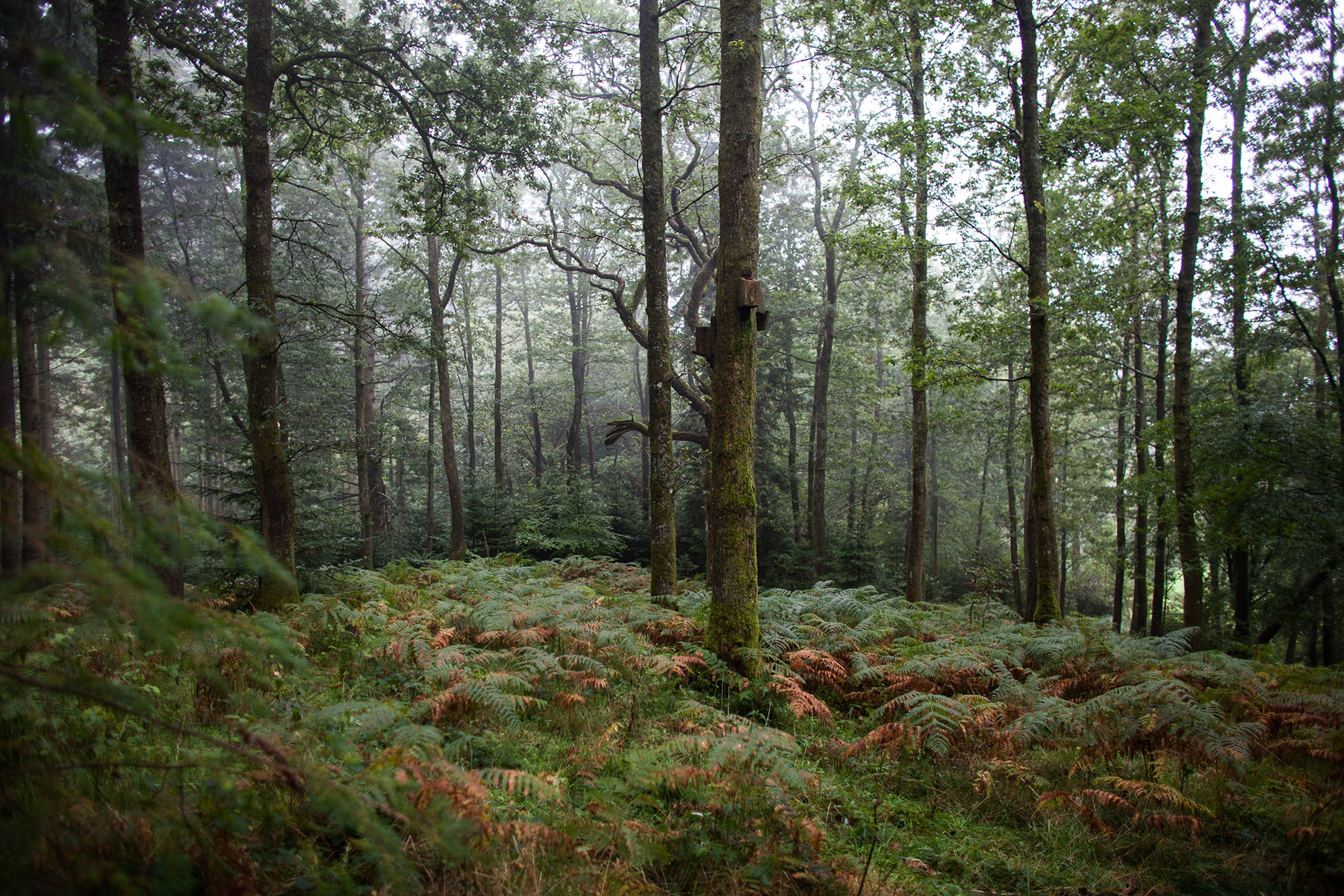 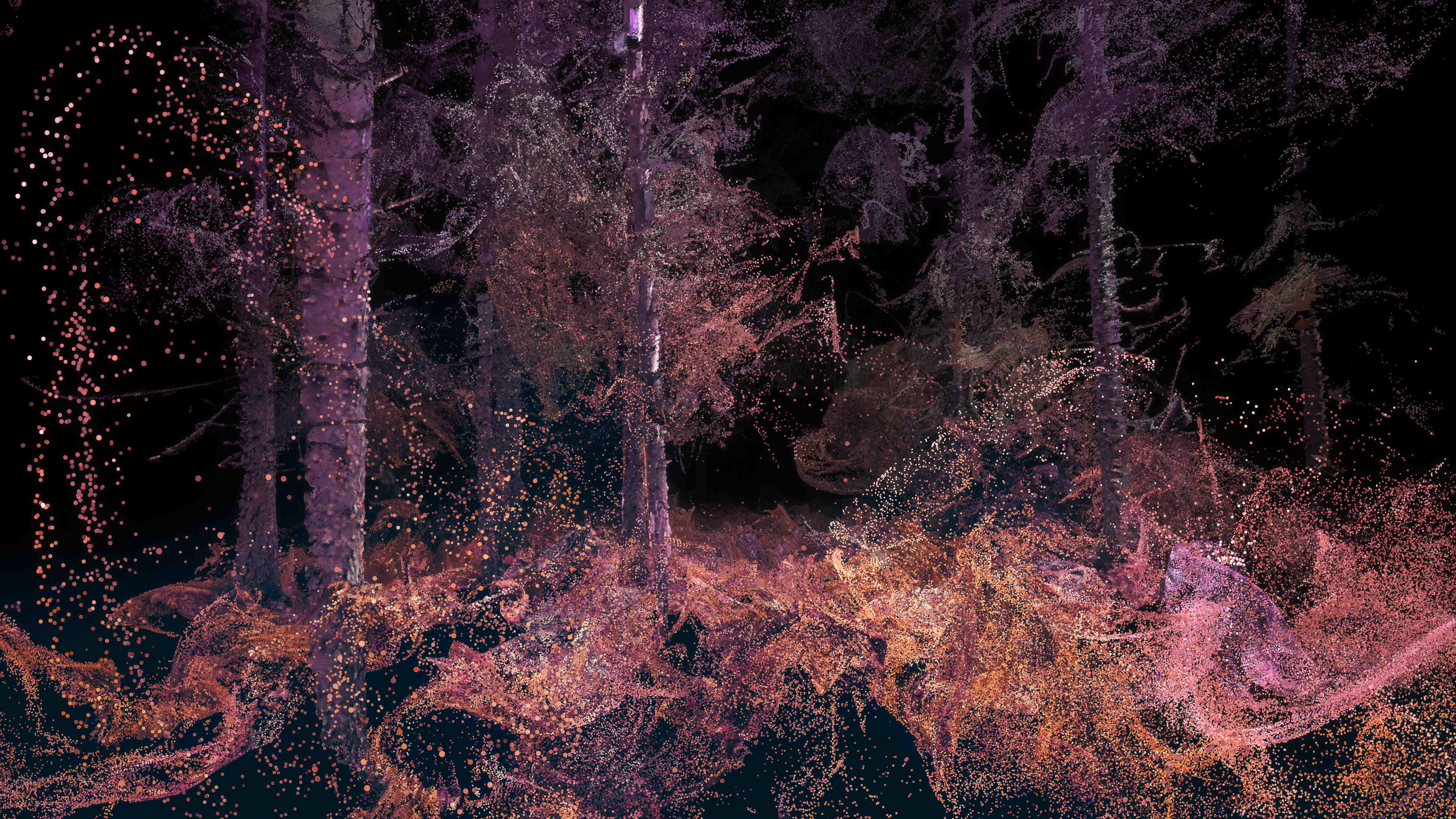 Connecting with rocks and beasts

Fabbula: Feeling as a fly gives a new perspective on the ecosystem of the forest. If we humans start to have experiences as animals or even as what is perceived as inanimate objects (like a stone… could we feel as a stone ?) What do you think the impact can be ?

Barnaby Steel:We are living in an age of such disconnection that inadvertently through daily consumption we are destroying our planet. Growing up in the city it’s easy to become an adult having had no connection to nature and other living things and why would we? We live in a man-made constructed reality; the language, the rules, the things we take for granted are constructed by man in advance of our arrival. Virtual reality, this cutting edge technology that flowers from the earth through the minds and hands of some very smart people, might prove to be a powerful means of reconnection to the rock that makes this whole show possible. Using VR to connect with nature sounds ridiculous, but the experience can be profound.

“As Allan Watts puts it: The rocks are alive.” 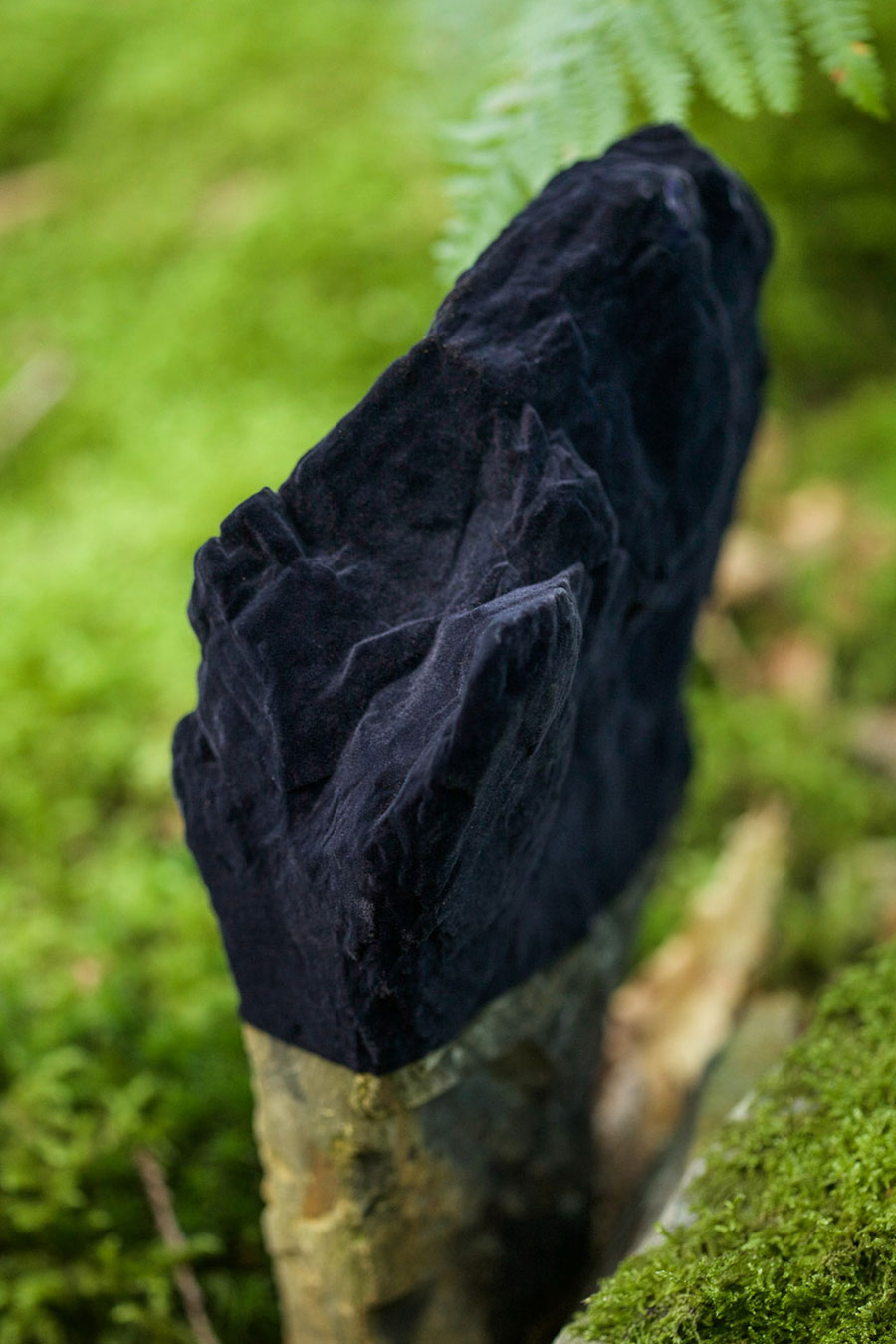 Fabbula: A VR experience sometimes feels like living a moment, and not just a moment of entertainment. As creators, do you feel a responsibility for these experiences? Like you’re passing on a message?

Robin McNicholas: We have certain motivations about carrying messages about nature and reconnection to the planet, but it’s not at the forefront of our minds, nor is the concept of providing a sanctuary for people. It’s more about a conversation within our extended family where things surface that align with the group passion. The Evernote (great software) ideas’ bank is overflowing but when we get a chance to realise our projects, it becomes about how we can make those as wonderful as possible. It’s our responsibility to make them amazing and we assume that if we can be amazed ourselves, then it will work for others too.

“Enhancing the sense of presence.” 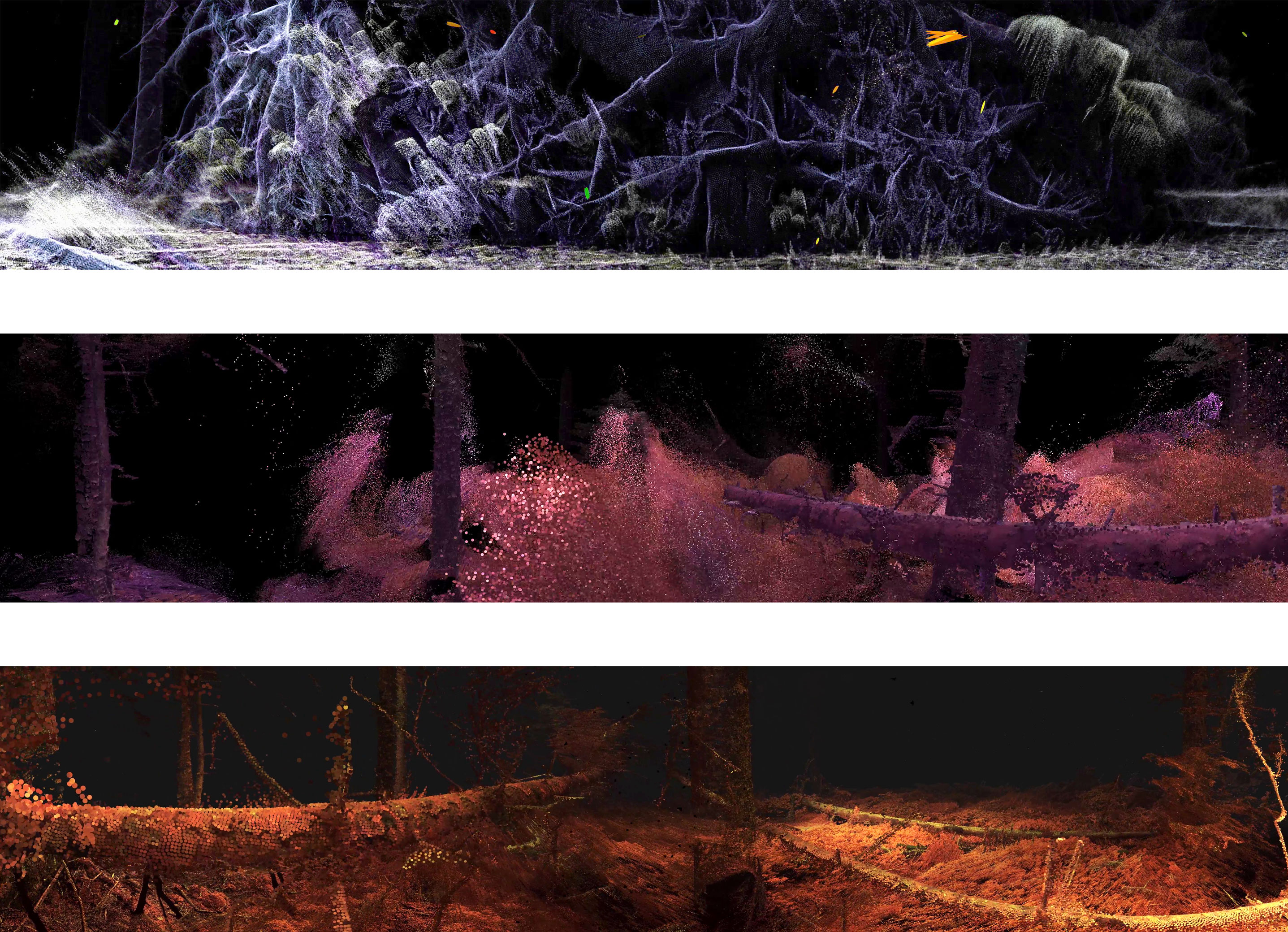 Fabbula: Talking about storytelling and narratives, how do you see them working in the VR medium?

Robin: We deliver alternative narratives from the normal ones. The great thing about this area of work is that it doesn’t need to be rooted in the traditional sense of a beginning, middle and end. It can be angulous. It can be endless. A place you revisit, or joining a game that was started before you were born.

Barnaby: We view the world from between 5-6ft high, we touch, sniff, see and hear, we skateboard, skydive and eat tuna. We tickle our senses in all manner of ways but ultimately we are locked in our bodies looking out. VR frees us from our bodies and offers the potential of experiences outside our normal reality. This isn’t the 1st time the doors of perception have been swung open. Humans have been exploring hallucinogenics, ayahuasca, mushrooms etc, since the dawn of time and it interesting to consider how this altered states translate into VR. VR offers escapism and as Huxley once put it “The urge to escape from selfhood and the environment is in almost everyone almost all the time.”

“VR frees us from our bodies and offers the potential of experiences outside our normal reality.” 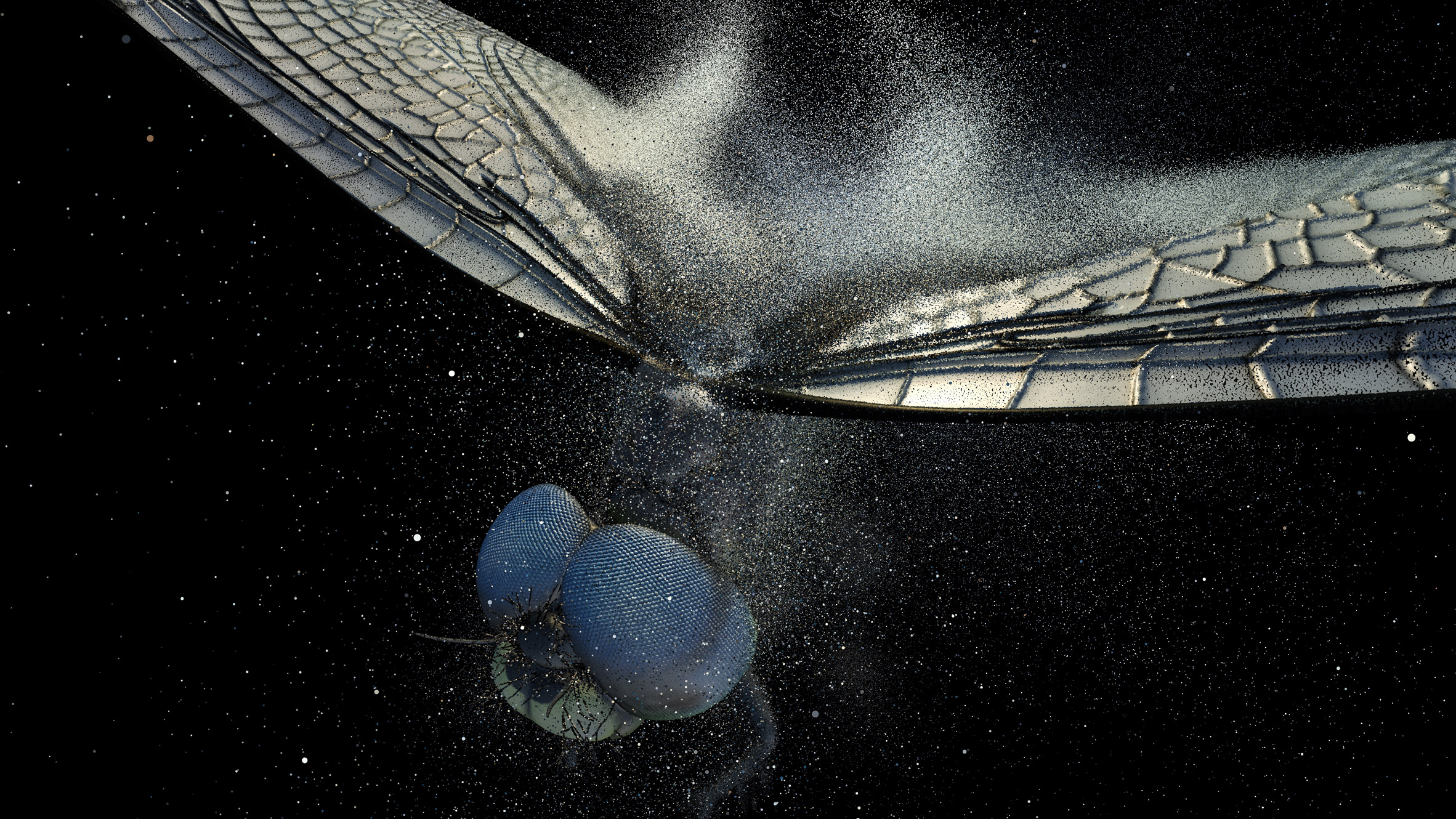 Robin: Because VR is a new medium, there are all these things that came before it, and are intrinsically referenced. When Flash on Internet came to be, people would present a book and turn the pages of a book on internet! And that’s interesting to see with VR, people start to make films, start to make games until Virtual Reality takes root and forms its own conventions, its own norms and vocabulary. The audiences will also be very different. You’ll get gamers, films goers, theatre goers, they’ll get their share. But you’ll get others as well…

Fabbula: Are there other fields where you think VR is well adapted?

Barnaby: I think VR will find a great partner in music. People still pay a lot of money and travel great distances to see a gig. By not being limited by the costs of LED, health and safety restrictions of lasers or the laws of physics, we’re excited about VR worlds generated by music. Imagine landscapes of sound that ripple like water, where stems can be manipulated and sound is malleable like putty. 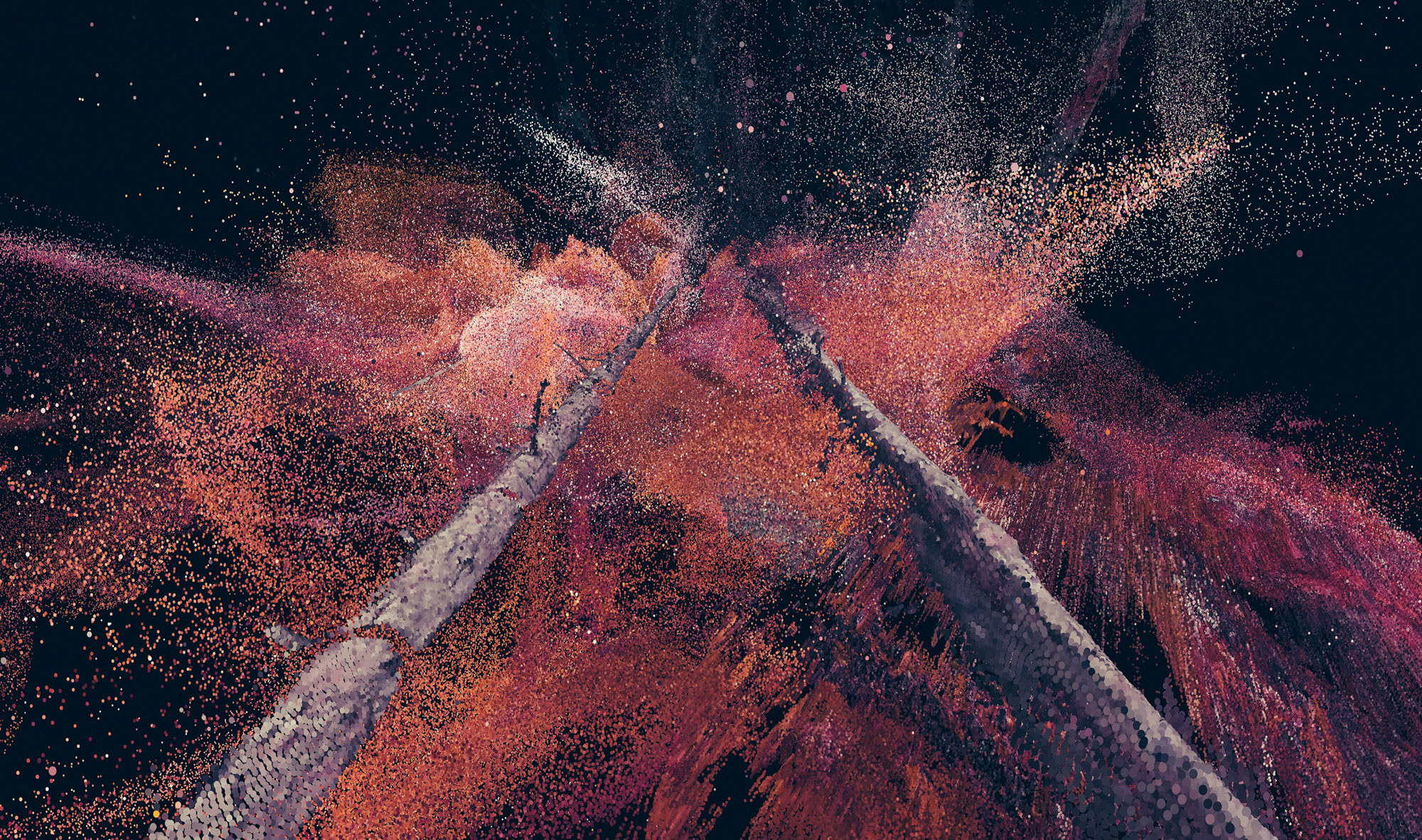 It’s interesting that you are getting into game technology. Games often use their world as the story itself, as a kind of spatial narration rather than being time-based. A great example is GTA, where the city is the story. With immersive VR, it could be even more so. Do you think so? Do you think that there are other narrative elements in VR beyond the sense of place?

Barnaby: There are really so many possibilities, ultimately VR will be able to replicate not only reality but anything we can dream of. We agree that immersive VR enhances the sense of presence and that this opens new types of game play that wouldn’t work when looking at a screen in your living room. For example, in the real world I can sit on a mountain and daydream for hours, and this can’t be fully translated to a TV, but in VR it just might work.

We found that by scanning nature and simulating natural phenomenon like fluid dynamics, we were able to tap into and in some ways enhance, the inherently relaxing qualities of being in nature. 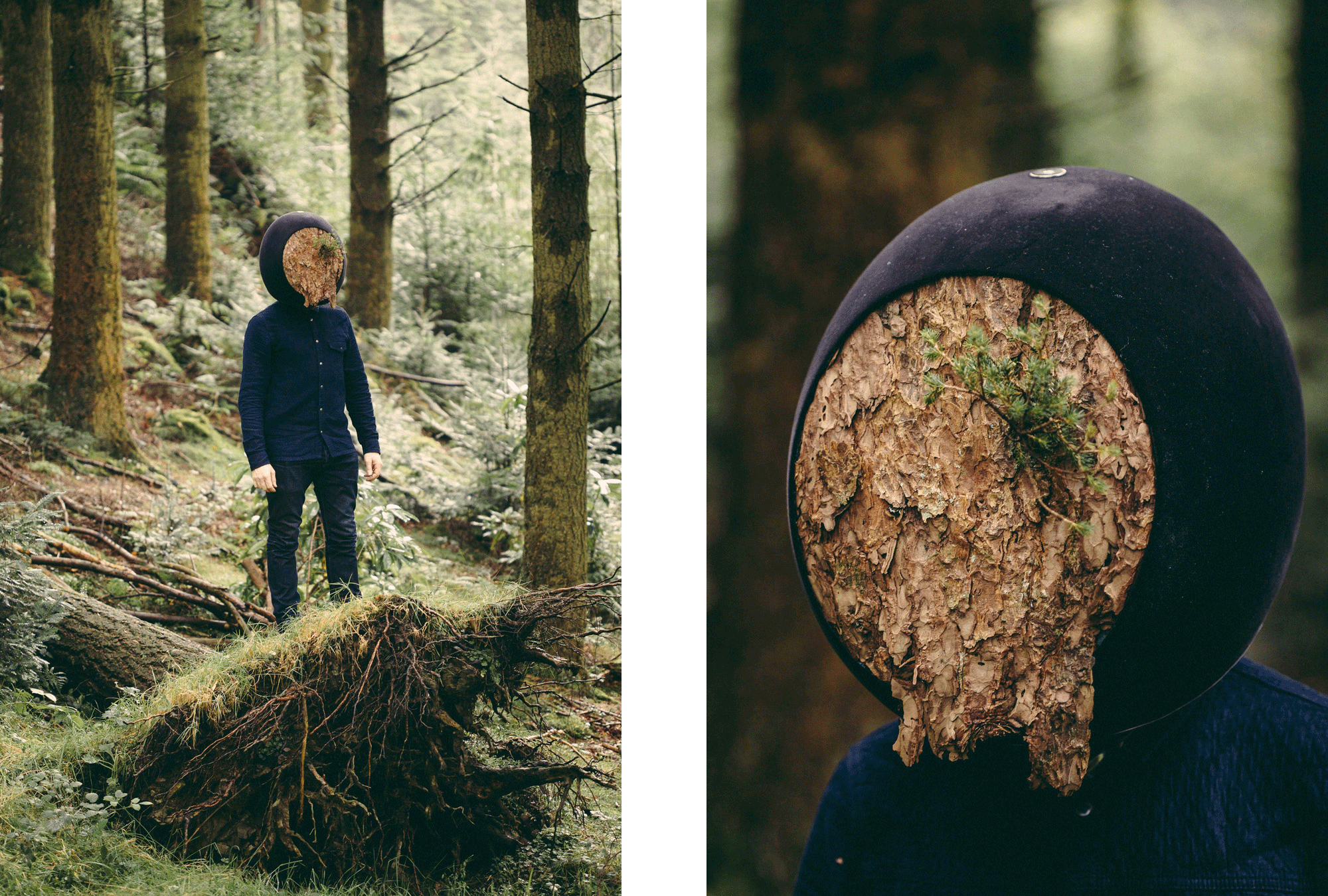