Of Hybrids and Strings is a fabulatory immersion into possible human and non-human connectedness. In a forest, at night, one becomes strangely entangled to plants and creatures. Until the forest starts to crystallize…

New virtual reality artwork by artist Lauren Moffatt, Of Hybrids and Strings is the first artwork awarded the Worlding with the Trouble commission and residency. The piece has been officially selected to premiere at SXSW this year.

Experiencing an ecology that is slowly but visibly changing

We enter a forest bathed in moonlight. Surrounded by flowers and strange creatures, we encounter a spectral shape, which reproduces our every movement. Soon, threads weave around us, connecting all things to others and to ourselves. We are slowed down, entangled in the environment. Then a crystal wave covers all living things, the whole forest is transformed. We attune into it, until we melt into it.

Of Hybrids and Strings is a trans-species experience in which we slow down, and become entangled with the human and non-human. By confronting apocalyptic visions haunting science-fictions of the 1960s, with Donna Haraway’s contemporary thinking, the experience calls for “staying with the trouble”, deepening our sense of belonging in our infinitely complex and unpredictable present. Of Hybrids and Strings is a virtual space to practice a new way of being- in-the-world, and to acquire new powers of action. 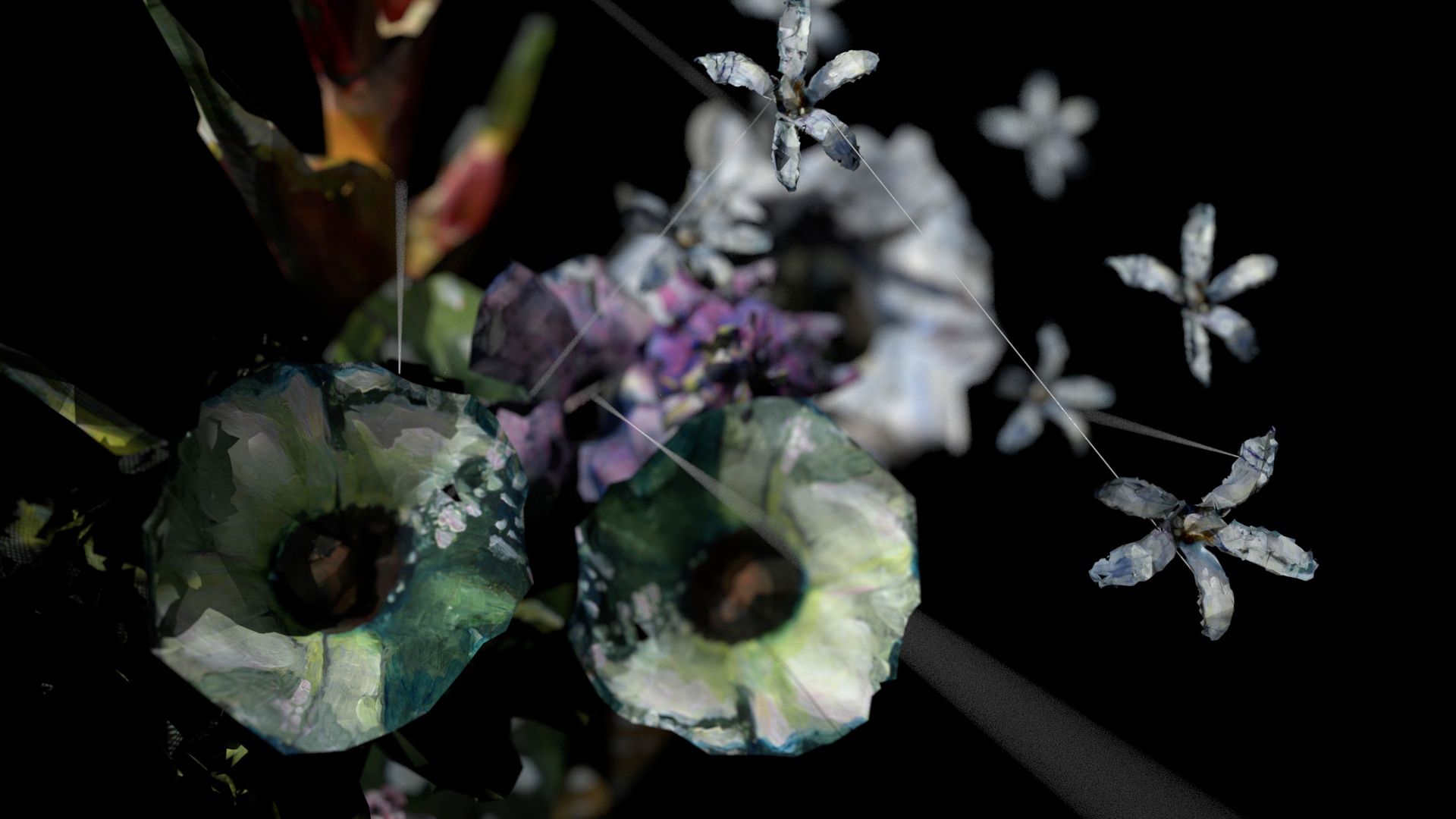 How can video games, an expressive medium that is representative of all the acceleration of big tech and consumer electronic culture, be exploited as an engine for slowness and gentleness? Immersive game environments are astonishing in their complexity and in their hypnotic potency. We often see this medium used to generate motors for escapism, for the expression of violent desires that are forbidden in civil life. This type of digital world responds to the same hopelessness, cynicism and blind anxiety that have perhaps allowed us to feel so defeated by the crises that menace our species and its companions. Although this is how we have come to know video game environments, I believe the potential of this medium to be far more vast than the niche it currently occupies. For me this medium has the potential to create narratives that engage the mind and body in a simultaneous rhythm, like a mediation: immersive digital creation allows me to create dreams for the audience to experience wide awake. 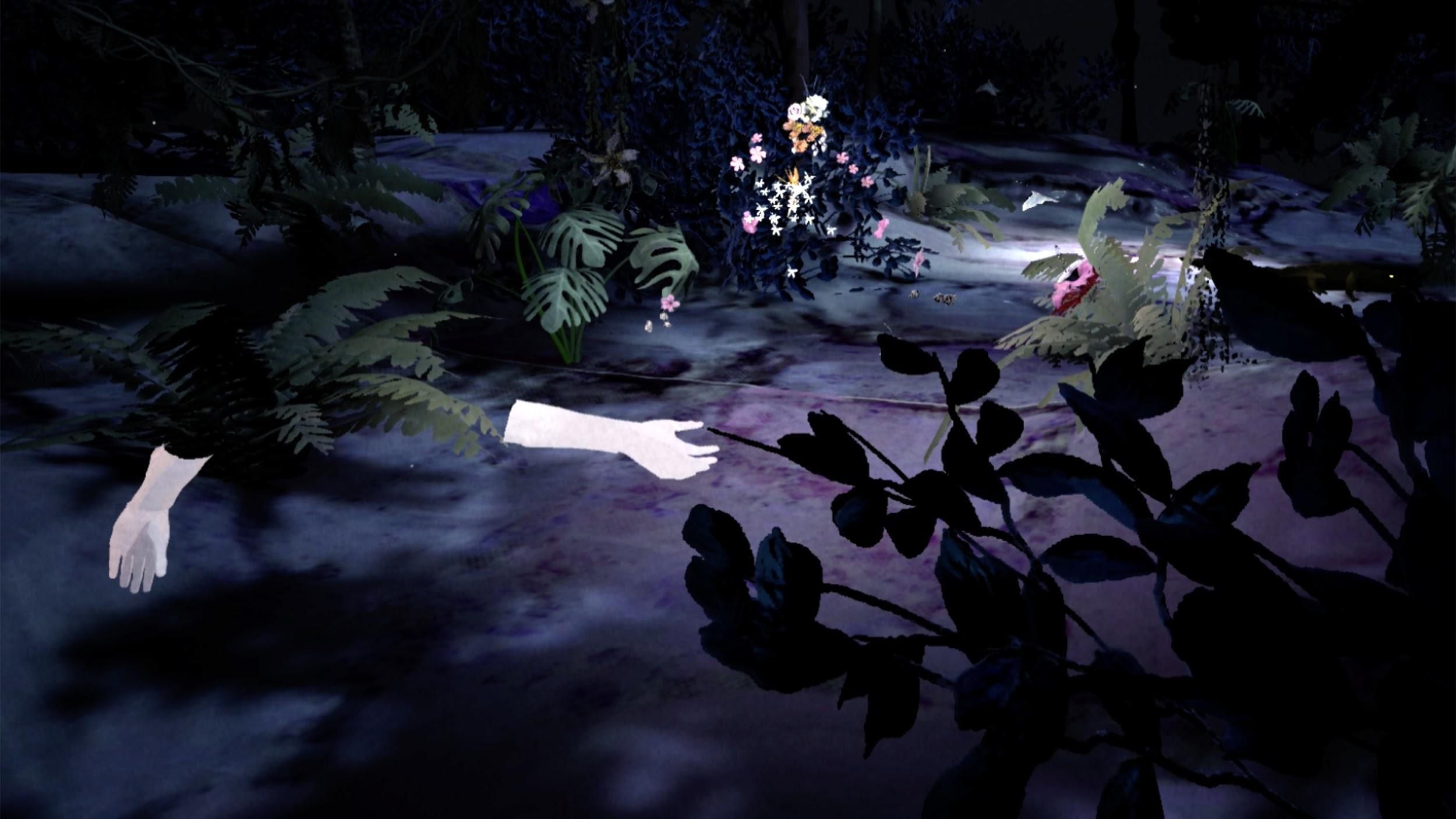 How can video games, an expressive medium that is representative of all the acceleration of big tech and consumer electronic culture, be exploited as an engine for slowness and gentleness?

In Of Hybrids and Strings we enter a moonlit forest, surrounded by hybrid flowers, strange creatures and faced with a benevolent stranger who reproduces our every movement. Soon, threads weave around us, connecting organisms to one another and to ourselves. We become interwoven with the environment. Slowly, a wave of strange geometries sweeps across the scaffold of threads, transforming the landscape. We become entangled in its decelerating rhythm, and finally we merge with it. 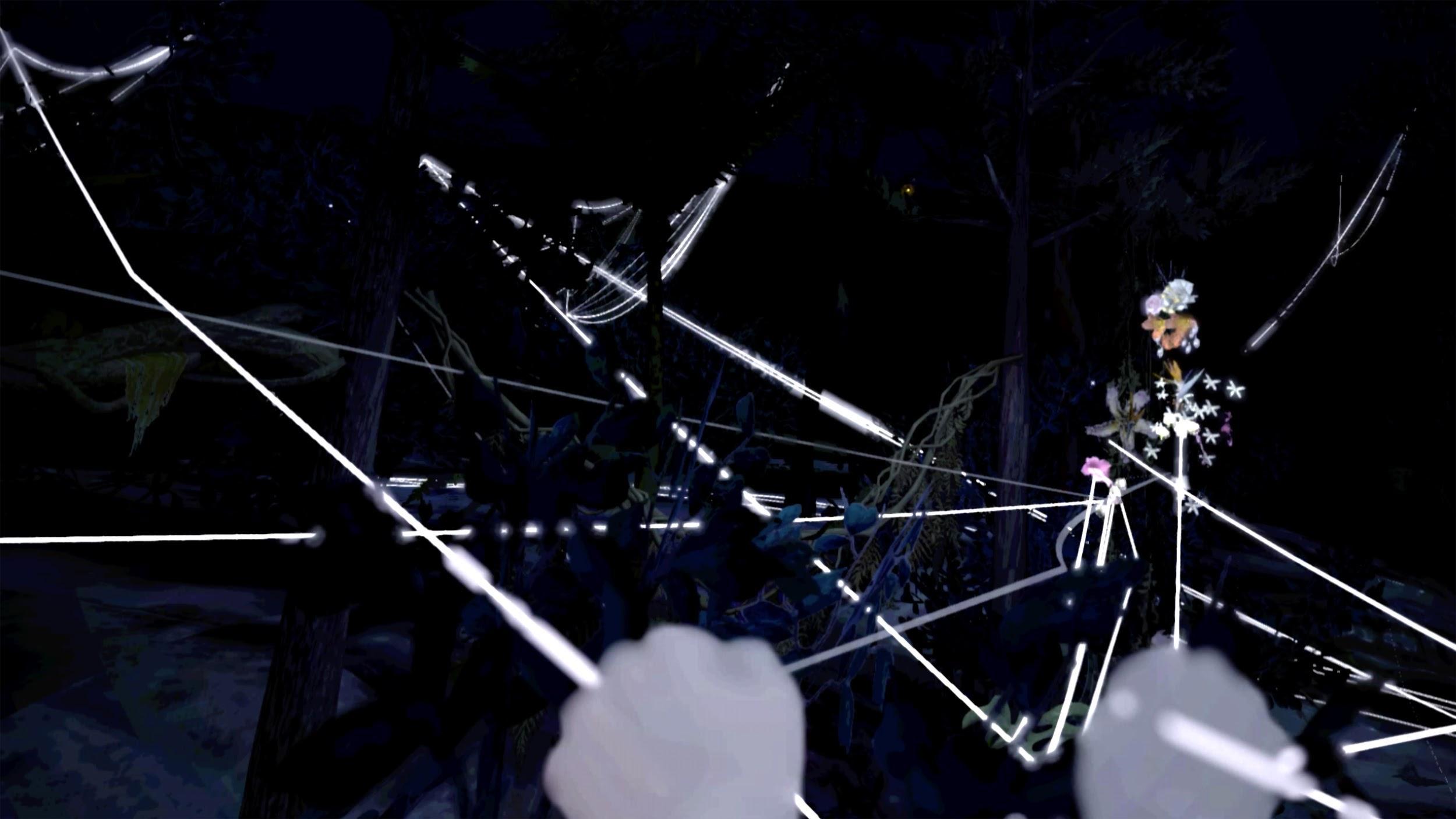 The original design for the exhibition of this piece provides a VR headset and controllers which allow the visitor to interact with the environment. An alternative version of the immersive video has been developed in parallel which works as a piece of procedural cinema.

As we see the landscape becoming braided together with strings – slowing gradually to a stop and resetting on a loop – an ever changing, ever renewing cinematic edit takes place.

In this version, a series of cameras wander simultaneously through the scene, and the application uses a set of intelligent principles to make a live cut of the never-ending sequence. As we see the landscape becoming braided together with strings – slowing gradually to a stop and resetting on a loop – an ever changing, ever renewing cinematic edit takes place. New perspectives are revealed on each pass. Here the immersion comes not from the interaction, but the meditative state that can be reached from watching these non-human intelligences wandering through the scene quietly and endlessly. They continue to crawl along their trajectories even after all living things have merged into the stillness of the petrified landscape. 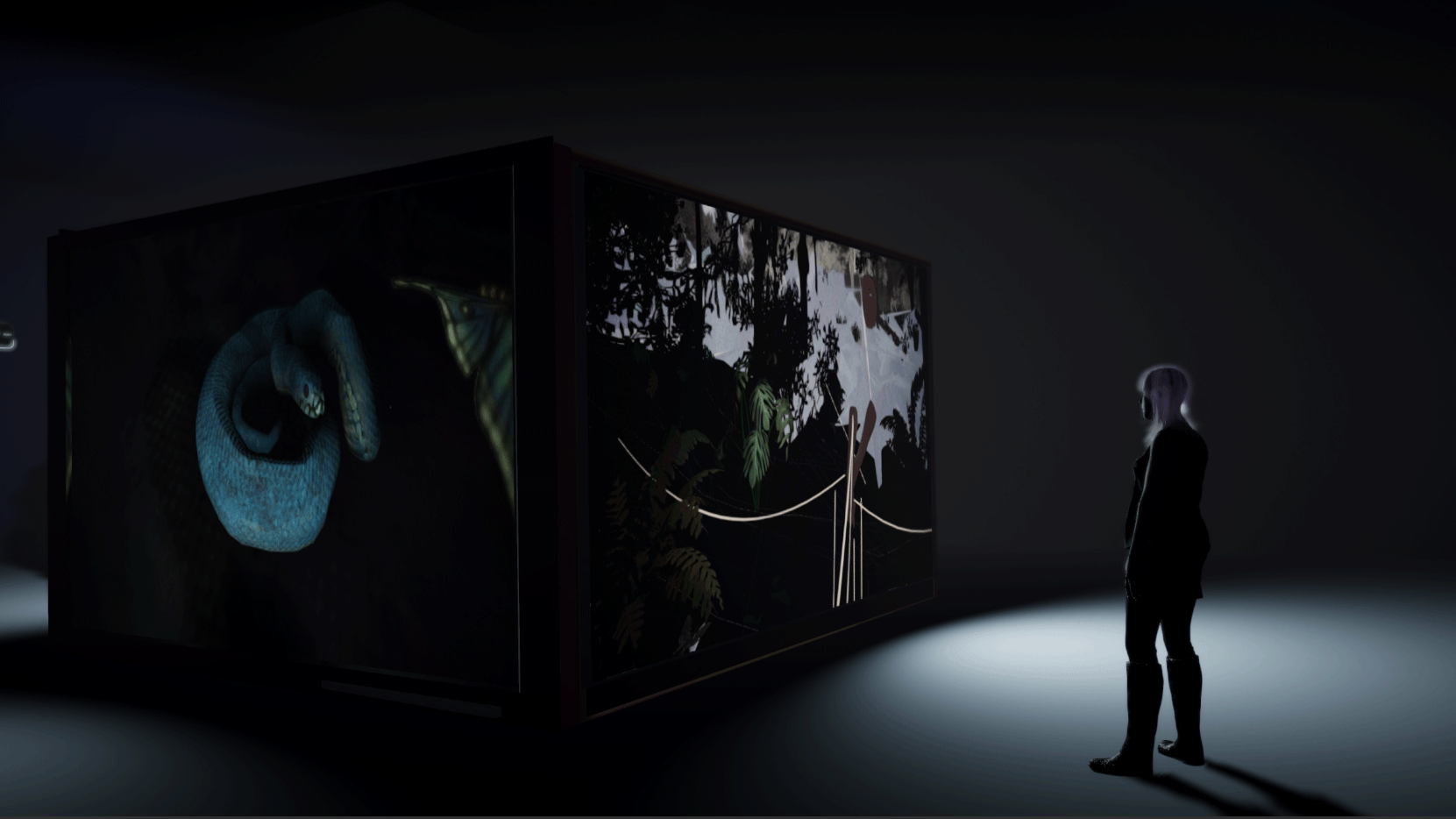 Of Hybrids and Strings has two components: a digital narrative environment that can be experienced as an interactive VR experience or as a projection, and a series of painted book covers, each one attributed to a fictitious author named Suzanne B. Clair. Suzanne Clair is an author who inhabits a parallel version of our world. The only difference between her universe and our own is that in Suzanne’s world, speculative fiction by authors who are not white heterosexual males has been published indiscriminately throughout the 20th century through to today. Suzanne Clair has been active since the 1970s and she writes science fiction projecting desirable outcomes for our kind, much of it concerning the fostering of links between human and non human species, the atunement of the body to its environment and the cultivation of and reverence for human creativity and imagination.

Flowers are impossible amalgams, they seem to have tempers of their own, as if they could speak back if they were asked the right questions.

What would Suzanne Clair’s stories be like? Who would the characters be? What challenges would they face? What do they eat? How do they travel? What sort of solutions do they design? 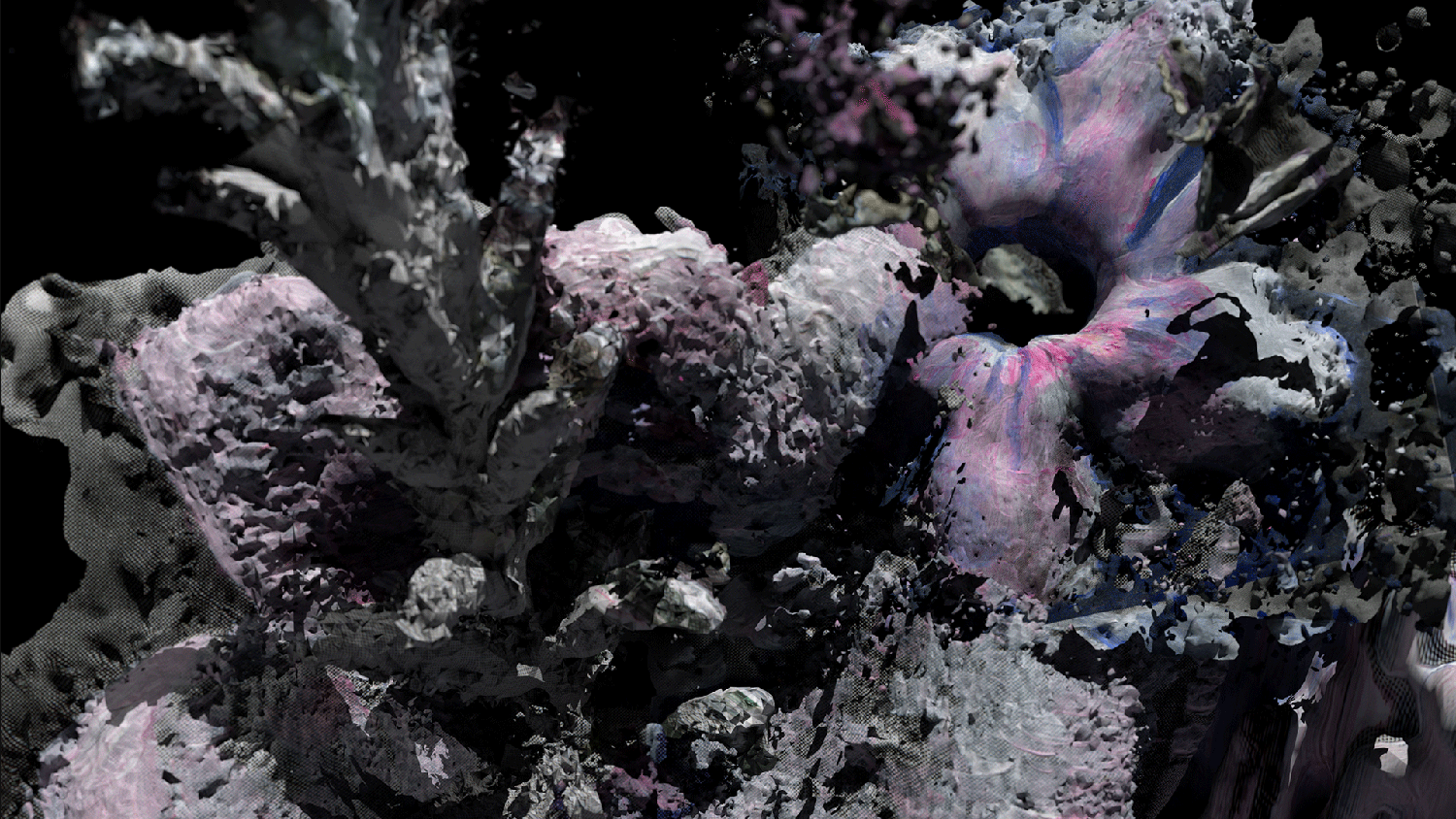 We only have the book covers and titles, the rest of the universe of Suzanne Clair exists within the imagination of the visitor during their time in the installation and hopefully long afterwards.

Although perhaps not immediately visible, an observant visitor will notice that the otherworldly flowers on the Suzanne Clair book covers reappear in the digital environment. They constitute the building blocks of the hybrid flowers growing from the shrubs and vines in the forest scene. These flowers are impossible amalgams, they seem to have tempers of their own, as if they could speak back if they were asked the right questions.

Within the installation we can experience stillness and absence, we can permeate this calm with our curiosity and resourcefulness, imagining desirable futures and seeking clues for how to achieve them.

The project as a whole wants to create a conceptual absence, an empty architecture that invites the imaginaries of hidden voices and potentials that we hold inside ourselves but have beaten down with our psychological and physiological defences. We have learned to survive by avoiding , and it is destroying us. The time has come to train our calm attention on our shared problems and think about what could work to solve them, but how to find such a place in our spiralling universe? Within the installation of Of Hybrids and Strings we can experience stillness and absence, and we can permeate this calm with our curiosity and resourcefulness, imagining desirable futures and seeking clues for how to achieve them. 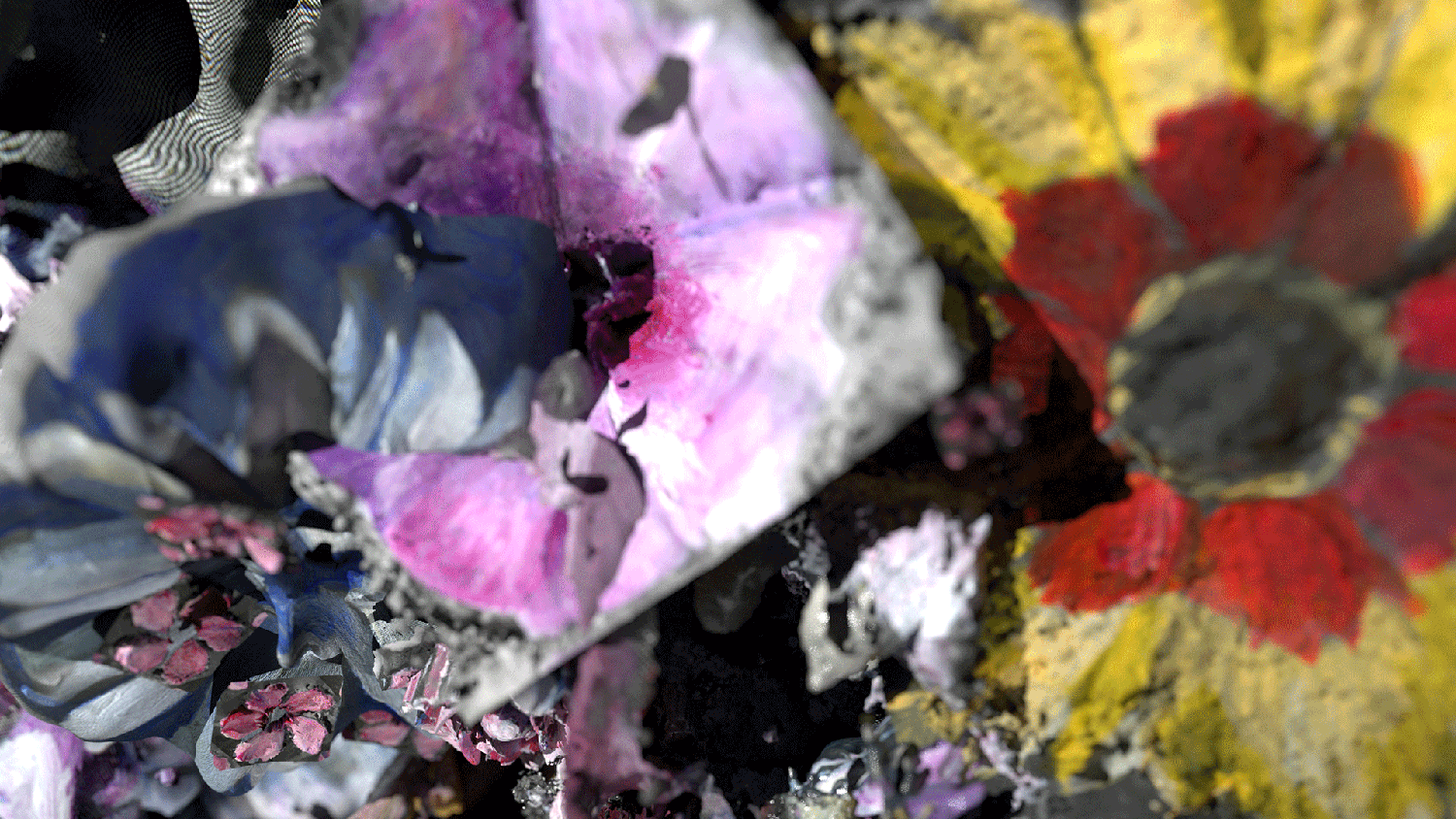 Lauren Moffatt is an Australian artist working between video, performance and immersive technologies. Her works, often presented in multiple forms, explore the paradoxical subjectivity of connected bodies and the friction at the frontiers between virtual and physical worlds.​
Lauren builds detailed, complex and paradoxical universes, often occupied by misfits and recluses and populated by strange devices and artefacts.​ Her ​pieces usually take the form of speculative fictions and environments, conceived using a mixture of obsolete and pioneering technologies, and which often occupy both physical and virtual space.

Lauren completed her studies at the College of Fine Arts (AU), Université Paris VIII (FR), and at Le Fresnoy Studio National des Arts Contemporains. She lives and works in Berlin and Valencia.