Anti-Gone is a new mixed reality live stream performance by artist Theo Triantafyllidis based on the original comic book by Connor Willumsen. It incorporates live performance with real time simulation to explore the social impacts of technology, privilege and the beginnings and ends of worlds.

We talked with Theo about Anti-Gone, here is the chat we had with him. 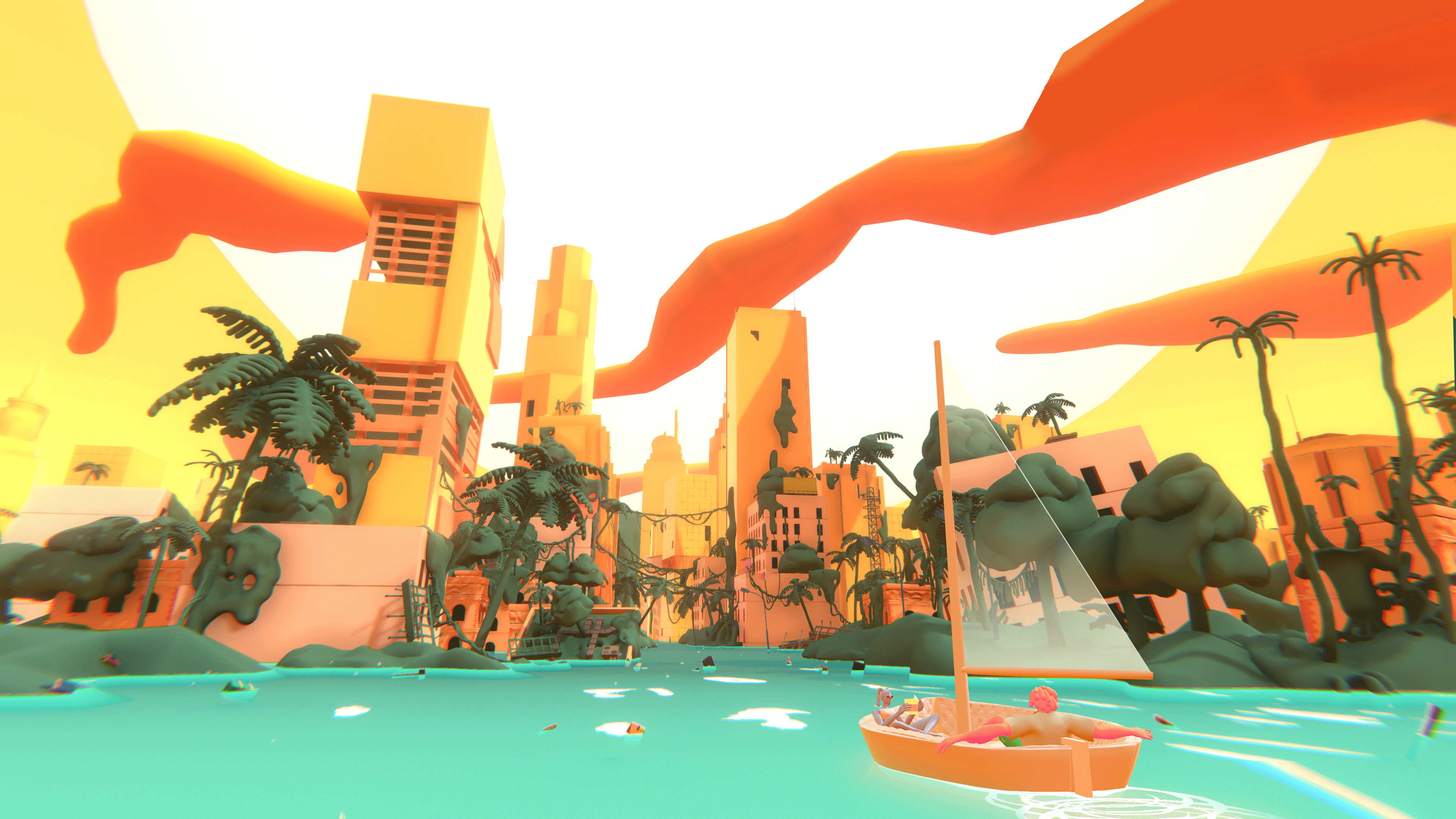 Acting in the virtual

Fabbula: Anti-Gone is a play with actors wearing motion capture suits and VR headsets. It is now live streamed over a Youtube interactive video. In French, Theatre, together with other performing arts, is often referred to as “Art vivant” or living art. In what ways is Anti-Gone alive?

Theo Triantafyllidis: At the core of Anti-Gone lies a performative system that attempts to bridge contemporary performance ideas with the mechanics of open world video games. I wanted to provide performers with the right tools and drop them into a meticulously crafted 3D environment where they have agency and feel empowered to improvise and explore. I really enjoyed this element of risk and uncertainty that brings performers to a state where they need to respond to everything in real-time rather than relying on scripted and rehearsed responses. I think this gives the audience that sense that “anything is possible” during the performance. This is something that was very present in Anti-Gone, the comic book by Connor Willumsen, that the performance is based on. And that was what really made it click with the ideas I was interested in exploring in Mixed Reality. This improvisational approach was also present in the whole process of making the work, from our early rehearsals with MoCap and VR, to the live music score and sound design to the level design in the game engine. In the latest Live Stream version of the performance we introduced a new element of audience participation via live chat that highlights this improvisation system and helps the audience participate and understand what’s at stake. 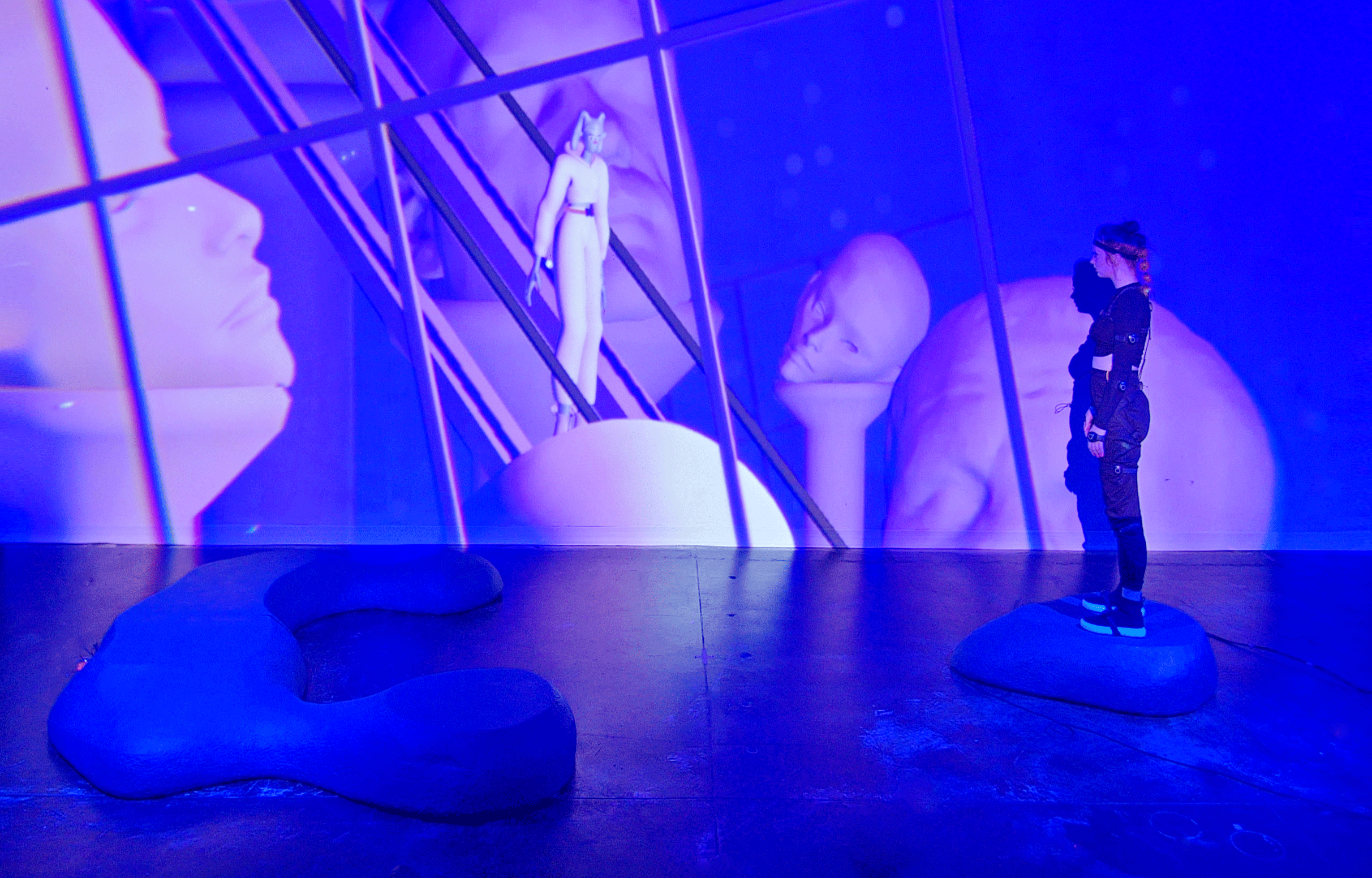 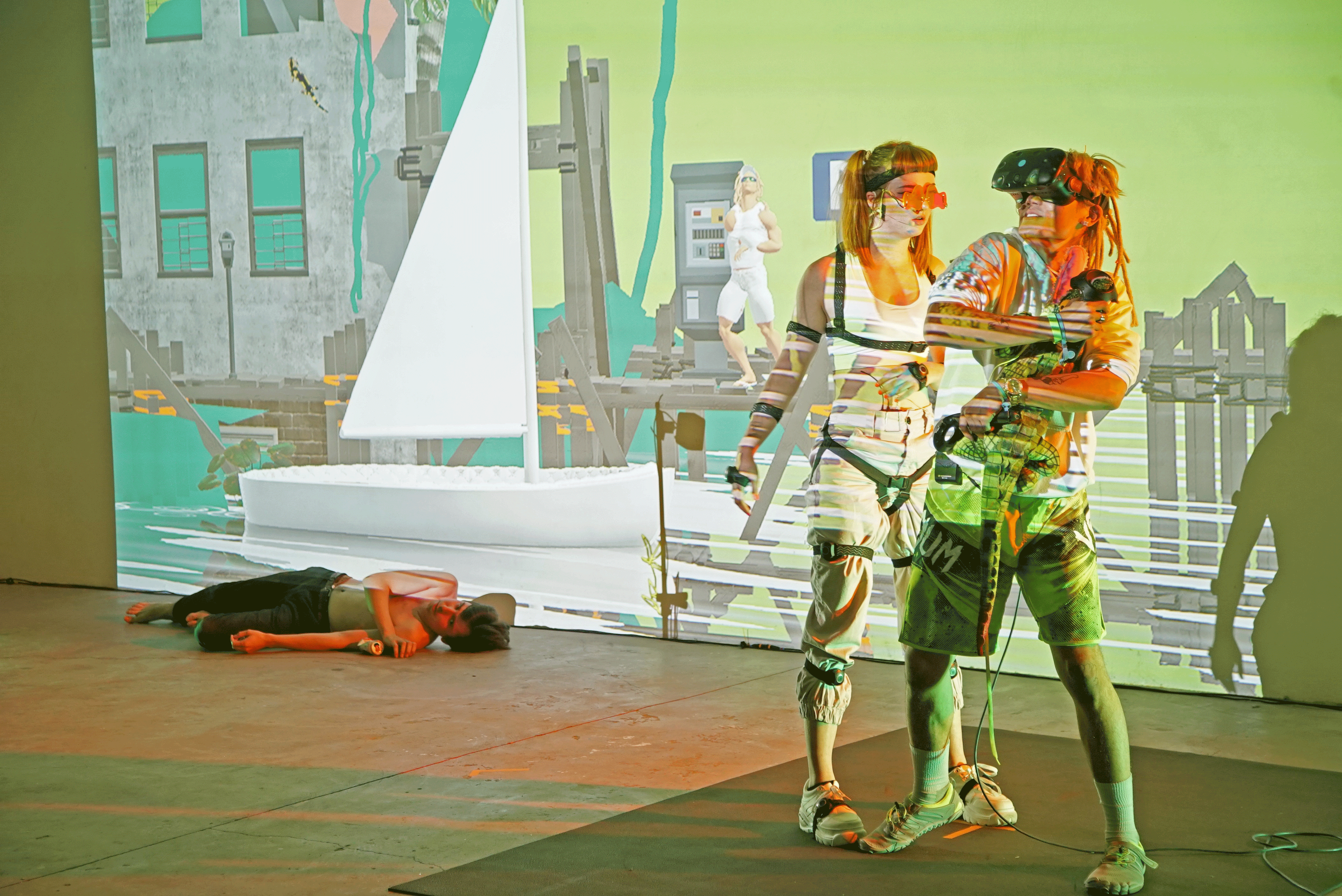 Fabbula: The interaction is a really cool part of the show, and creates perhaps a story within a story. How is it for a screenwriter, actors and a director to work with these multiple layers of storytelling?

Theo Triantafyllidis: From the beginning we struggled a bit with the practicalities of improvisation as storytelling, as it tends to lead to a specific type of absurdist humour that is enjoyable but not completely in the spirit of the work. Also, we were trying to do justice to the original comic book, that feels very much fluid and improvised is a linear plot with major events and a very well orchestrated emotional buildup that had to play out in a certain way. This contradiction led us to what I think of as a reverse branching narrative. The actors make a lot of decisions early on, can alter the script and explore the open game world, but at some point there is an avoidable disaster that hits them anyway. The Live Stream format and the introduction of audience participation and interactivity changed this.

Recently I have been researching the Live Stream phenomenon a lot, starting with the obvious question “why would someone want to watch another person play a video game instead of playing it themselves?”, as video games are inherently an interactive medium that requires an active user. I think the answer is that there is still a fundamental enjoyment in sitting back and participating in something by relating to someone else’s experience of it. One of the early references between our team and Connor Willumsen during the development of the performance was Goldvision, this youtuber that tries to play Grand Theft Auto V without killing anyone. In his videos he is exposing the inherent violence of the game’s design but also making surprisingly relaxing and wholesome playthroughs that let you enjoy the game in a very different way. What we realized from adapting Anti-Gone for live streaming was that the tone of the performance automatically shifted to be more laid back. This vibe and tone actually fit the piece very well and made more sense for this new format. We sometimes like to imagine someone watching it on the side while they work or listening to it in the background and occasionally being surprised at what just happened. 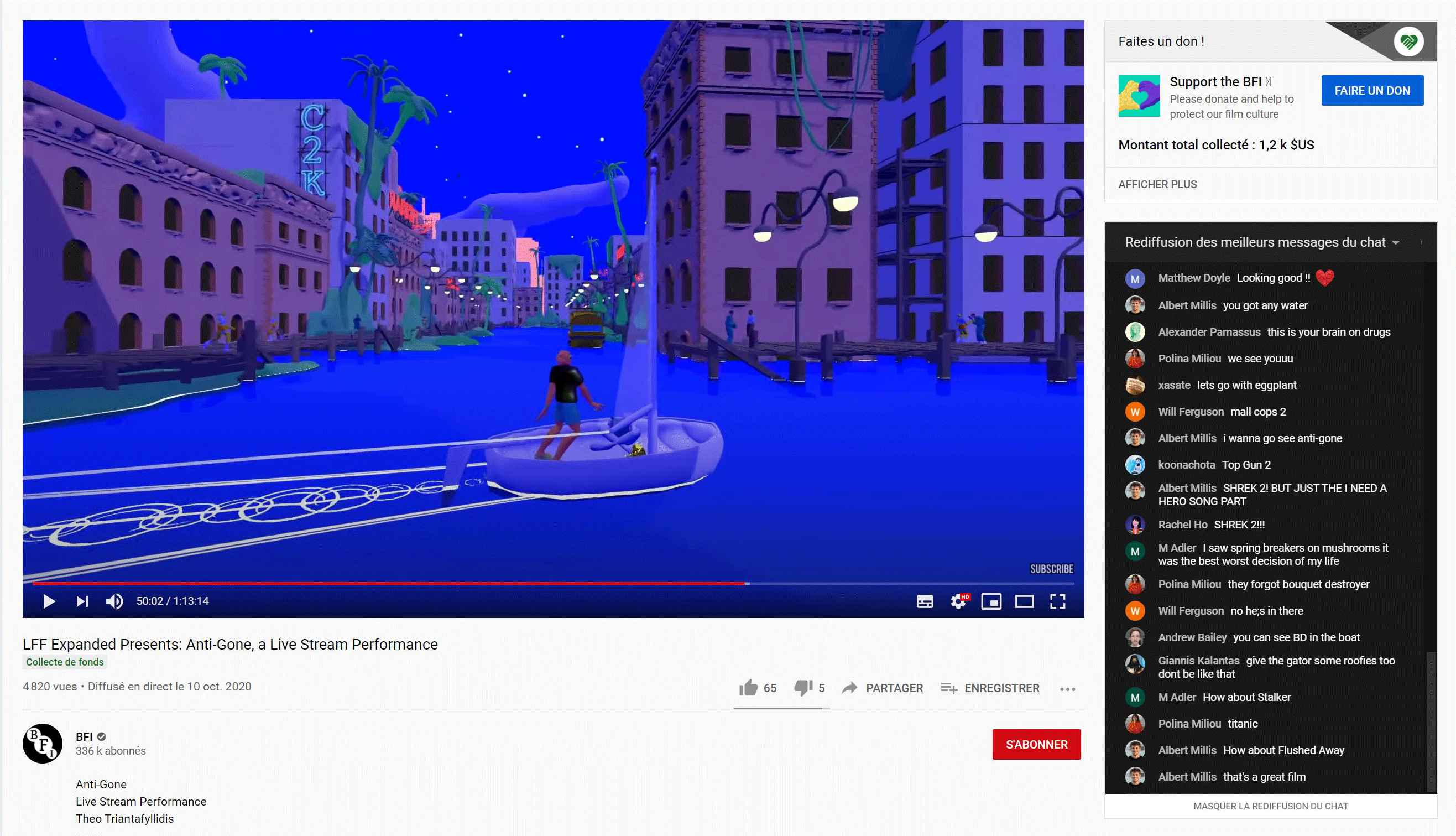 So the way we decided to bring in the audience participation was to think of the audience as this diegetic element of the immersive world. Like giving the audience a voice through all the secondary characters, the animals and the population of the Anti-Gone environment. What that practically means is that we have a third actor who is watching the chat and hand picking interesting remarks, comments or conversations and finding ways to voice act them within the performance and communicate with the two protagonists. This gives our lead actors the chance to interact and respond to them and that is something that the audience really seems to enjoy. The combination of this strange “3D animated film” with these surprising elements of real-time interactions gives the performance an uncanny feeling that I think plays well with the live stream format. 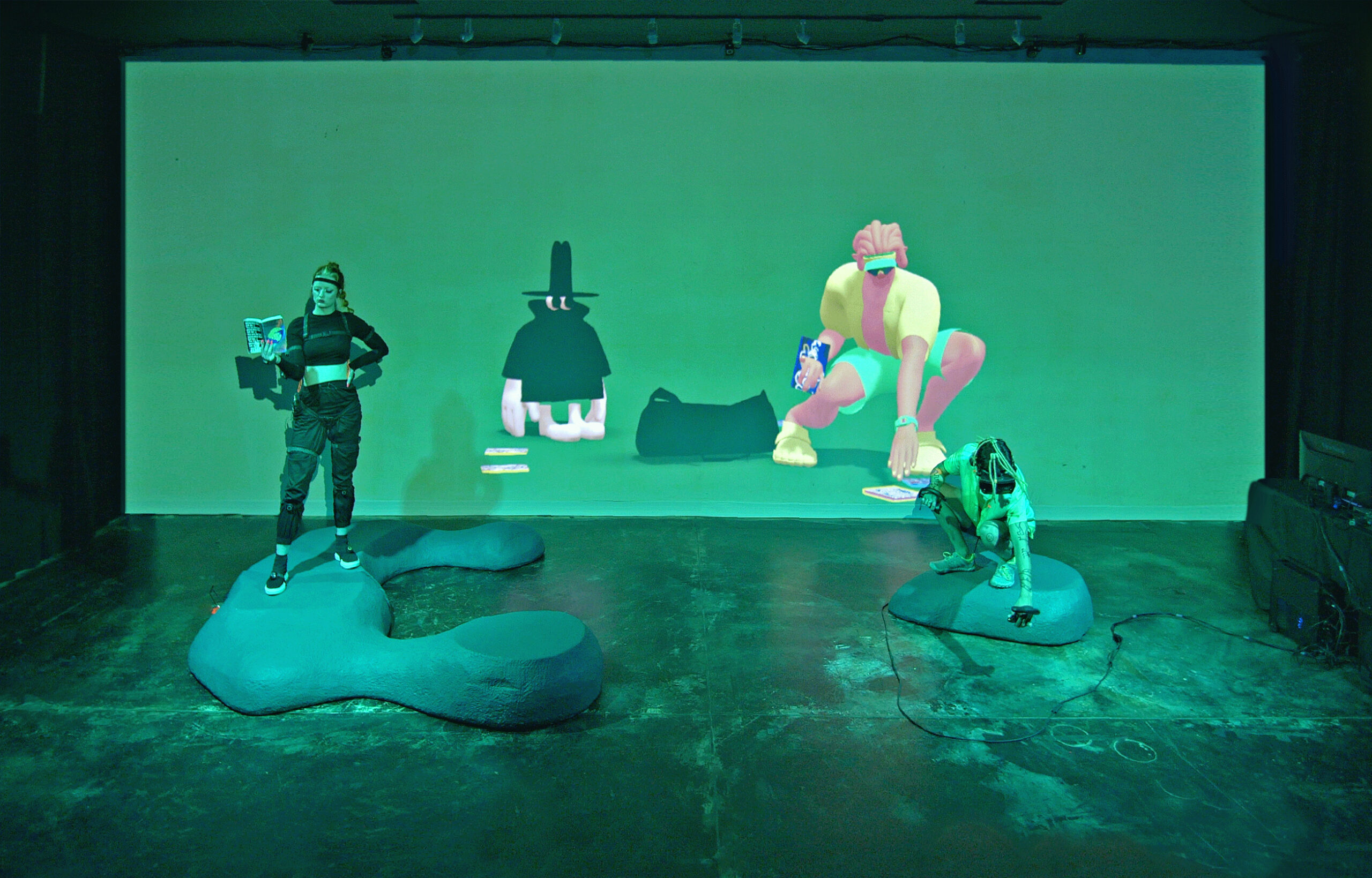 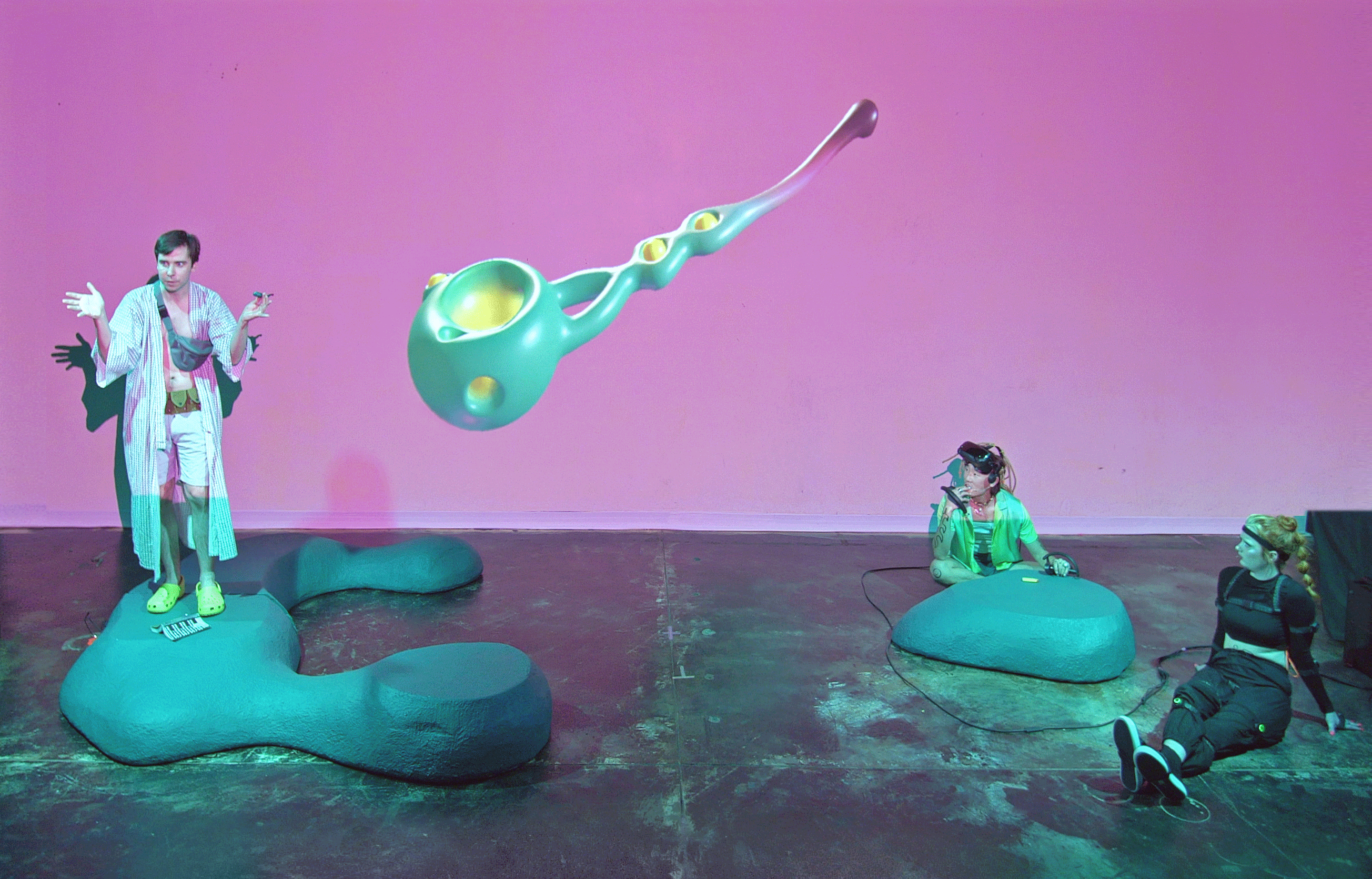 Fabbula: Have you thought about non-english speaking audiences? Where would you like to show Anti-Gone next?

Theo Triantafyllidis: We are very interested in bringing the performance to a wider European audience and breaking the language barrier and see what every audience brings to it. As an improvisation system we really want to try it out multiple times shifting as many parameters as possible. That seems to train our whole team and really sharpen our on the fly responses. After several performances in Montreal, Los Angeles, San Francisco, Park City and London we have noticed a wide range of reactions and unexpected interactions that make every single performance unique.

Watch a replay of the livestream at the BFI London

In a post-climate change world, environmental catastrophe has become normalized. Cities are sunken, yet the vestiges of late-capitalist culture clinging like barnacles to the ruins of civilization. Spyda and Lynxa are a couple navigating this world frictionlessly. On their sailboat, they glide from shopping to movies to psychedelic drugs, and social unrest. In a damaged world where you can have anything you want, what’s the cost?

Commissioned and Produced by Onassis Culture.
Based on the original comic book by Connor Willumsen.

Theo Triantafyllidis (b. 1988, Athens, GR) is an artist who builds virtual spaces and the interfaces for the human body to inhabit them. He creates expansive worlds and complex systems where the virtual and the physical merge in uncanny, absurd and poetic ways. These are often manifested as performances, virtual and augmented reality experiences, games and interactive installations. He uses awkward interactions and precarious physics, to invite the audience to embody, engage with and challenge these other realities. Through the lens of monster theory, he investigates themes of isolation, sexuality and violence in their visceral extremities. He offers computational humor and AI improvisation as a response to the tech industry’s agenda. He tries to give back to the online and gaming communities that he considers both the inspiration and context for his work by remaining an active participant and contributor.

He holds an MFA from UCLA, Design Media Arts and a Diploma of Architecture from the National Technical University of Athens. He has shown work in museums, including the Hammer Museum in LA and NRW Forum in Dusseldorf, DE and galleries such as Meredith Rosen Gallery, the Breeder, Eduardo Secci and Transfer. He was part of Sundance New Frontier 2020, Hyper Pavilion in the 2017 Venice Biennale and the 2018 Athens Biennale: ANTI-. Theo Triantafyllidis is based in Los Angeles.