Daniel Ernst is the creator of the Shoebox Dioramas, a collection of stunning VR works about to be complete with the release of The Marchland, available early april. Fabbula recently met with him in his den at The Hague, which started a fruitful conversation on space, time and the in-between worlds.

I love dioramas. And from the early days of VR, I expected dioramas to be a great inspiration for works of VR. Dioramas sit between motion and still worlds. Sets and figurines remain still, while some elements move, their endless looped actions bringing worlds to life. They can be examined at leisure, discover every nook and cranny and relish in the fact that they will always be there. A movie set you can inhabit and project your own countless stories onto.

Well it seems I wasn’t alone rummaging these thoughts and someone actually decided to do something about the idea. Enter Daniel Ernst, who has devoted all his energy during the last two years to building VR dioramas in Virtual Reality. Fabbula recently met with him in his den at The Hague. As it turned out, his story with dioramas goes way back.

As a kid growing up in the Netherlands, Daniel was mind struck during a visit to The Efteling. The Efteling is a large fairy tale themed park in the Netherlands, built by the legendary Anton Pieck and opened in 1952, which is about 3 years prior to Walt Disney opening Disneyland in California. Amongst the sensational attractions lied a little advertised diorama designed and crafted by Anton Pieck himself. 60m long, complete with elf villages, miniature trains, flowing water, night scenes, the massive diorama made a lasting impression on young Daniel, for what was to become a relationship with a place that still carries much importance.

This diorama exerts a particular power on him: “Every time I visit the Diorama at the Efteling I feel like a child. Perhaps my memories of that space are contained there. I think about that place as being a space in time. It’s like revisiting your childhood room; except that this one has never changed.”

Many years later, Daniel became an artist and illustrator, initially working on large video games and gradually moving over to a smaller team where he could have more creative freedom and control. At some point After finishing a first video game with a friend, Daniel decided to “do everything by himself”! He learned 3D, Unity programming & designing interactions, quite a tall order for an artist. That was in 2012, right when the Rift DK1 was announced, providing the perfect opportunity to match a new medium with new skills.

From the onset, the focus was on the storytelling, the care in crafting the experience to trigger a wide range of emotions. That’s when the idea of Diorama came back to mind, the perfect place to instill emotions with a limited range of camera motions and interactions. Daniel started to work on Blocked In, a piece in which you feel sucked into an “in between” space and time.

Beautifully set, with great audio elements and a very homogenous experience, Blocked In triggered a certain melancholia of time passing by as a endless loop. A sort of slowed down contemplative animated gif in which your mind can drift and. To the surprise of some, who were expecting the adrenaline infused content to really be topping the charts, Blocked In became one of the highest rated experiences for the Rift Dk1.

Daniel earned his reputation as a gifted VR pioneer and Thorsten Wiedemann, the man who recently spent “48 hours in Virtual Reality”, ranked it as one of his favorite experiences. He explained in a recent interview: “In dioramas you don’t interact, and it’s pretty awesome. I think doing nothing, just hanging out there and enjoying it…you have your thoughts. In the real world, in reality, everything is very busy. You have your phone, you have two laptops, three screens or whatever. You need some kind of silent space or place. I think in the future this will be something VR can be, a sort of silent place.” (full interview in Gamecreate)

“I think in the future this will be something VR can be, a sort of silent place.” Thorsten Wiedemann. AMAZE founder and the man who spent 48 hours in VR

Reaching out for the stars with Der Grosse Gottlieb

Showing Blocked In for the first at the AMAZE festival in Berlin, Daniel explains how he came up with his second work. “I noticed that people were reaching out for blocks in front of them. I found it to be a very romantic notion. So I wanted my next VR experience to have object interactions and tell a story with that. That’s how I came up with the story of the acrobat who tried to reach the stars.

In Der Grosse Gottlieb, you sit on a pile of chairs high up in the sky and look around. After a while you start to see stars twinkling in front of your eyes. You try to reach out for them and grab them. Children usually try to reach the stars; some older people too, but not as many, unfortunately!

So that story is quite simple; but it’s something that resonates in people. The narrative and interactions are hidden, but people understand. They feel like they’re discovering things.

Sometimes it’s down to very subtle adjustments. With the stars for example; first I had them spawning right in the centre of the field of view and people were like: “Oh well, you’re spinning stars”. Then I spun the stars in the peripheral view and all of a sudden they were like: “Oh, look, a twinkling star!” and they wanted to reach out for it.

So it’s a very subtle thing, a very subtle interaction thing, but it actually tells a story, it makes you feel something. Just by moving a star from the peripheral vision to the centre. The whole diorama tells the story of wanting to reach the stars but you never will, you try to escape from your normal world but you can’t. Sounds matter a lot too. The microphone streams a live audio feed of the actual surroundings into the virtual world, but only when you look down; so when you look up you don’t hear your surrounding audio anymore. That’s something I find very interesting: incorporate the real world into the virtual world.”

Der Grosse Gottlieb was best experienced with a haptic environment complete with stacked chairs and a fan. Here is how it turned out.

Out of body experiences with The Marchland

Daniel is about to release his third diorama, “The Marchland” which incorporates everything he has learned and is the first to feature characters and the ability to move around (The Marchland is really to be seen on Vive, the Oculus version touring on certain festivals doesn’t really make sense until the Touch controllers ship).

“You’re in a tollbooth and you see the cars pass through the rain. The rain outlines them. You can see your hands and hear your hands and see stuff moving where you move your hands. So you’re like this weird ghost looking at ghost cars outlined by the rain. When you walk outside, out of the tollbooth into the rain, you see your hands outlined in the rain. So there is a bridge between reality, virtual reality and some weird place in between. Maybe that’s what I’m doing: creating weird places in between. Because I don’t want it to feel like a virtual environment and I don’t want to make it feel like reality. I want it to be the “In Between”

The Marchland will propose three point of views of the same scene, which is a an idea that I’m particularly fond of. Seeing the same scene and story from multiple angles tells a choral story that seems such a right fit for VR. Showing multiple point of views is nothing new and has been masterfully done in cinema, literature, theatre, etc. But VR can make give much physicality to the concept and therefore conveying a strong statement about perceptions and point of views : we are only seeing from where we stand. With VR that all feels physical and can give you this instant out of body experience and make you realise how much more is to be gained from alternate points of views that can become your own. 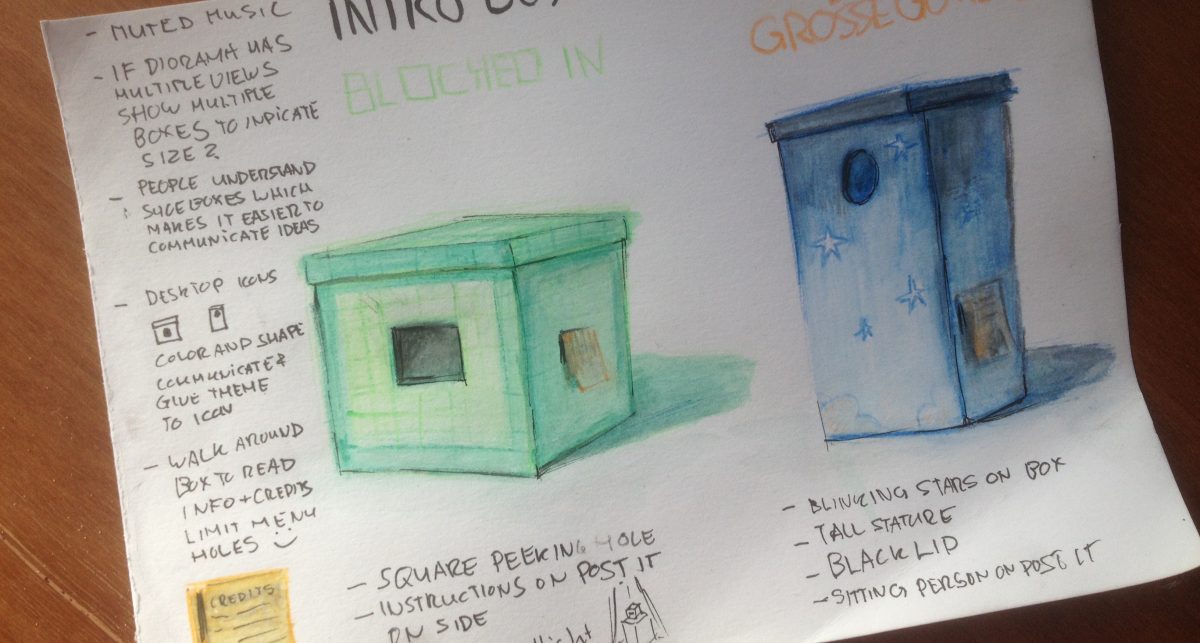 Ultimately the 3 dioramas compose a collection that will be presented together. Daniel came up with a very neat way of presenting them and reproducing the diorama in a box effect: From the interface you see shoeboxes, each of them customized to the idea of the diorama. On close inspection, you see peepholes in each shoebox and leaning in gives you a glimpse of the diorama inside.

What a great way to translate the VR notion of getting into a world, a fictional universe that exists right by you. As an enclosing space, i find the shoebox works better that Alice’s looking glass metaphor. No doubt that the upcoming mixed realities will allow a lot of these to pollinate our perceptions.

And with this Daniel fulfills the promise of providing a beautiful safe place, lost in its own time, a still space sparsely animated, where one can both contemplate and reflect, a space that becomes reality as it imprints its eerie atmosphere on you, a space you can populate with your own story.